Damn, I sure hope this works. As plans go, lately ours feels like it may not be quite so ‘cunning’, and it’s certainly not very ‘little’. In spite of these feelings, we move forward into the winter, anticipating the spring when we are hoping all these loose ends we’re dangling into the void of the Universe will coalesce into something solid. That ‘something’ will be living on the boat while our house pays for itself with renters. This is not a small endeavor. In the words of a certain infamous business man, ‘It’s ‘HUGE’.

Freshly graveled driveway and simplified gardens. Can’t wait to take a photo in the spring or summer, when things look better.

Pretty much the color of our blood right now is green. Having never gone this route with a house before, we didn’t anticipate how much it would cost to get things ready for someone else to live here. Dang! Some of these are big ticket items like having the old Douglas Fir trees thinned to reduce windage and yard debris. Most things, though, are small things like buying linens for beds and painting a room. At first, we didn’t really notice the expense of these things. But as we start adding it all up, we realize it’s like death from a thousand small cuts. The bloody green is just everywhere. If you are considering making this kind of move in your own life, you can consider this your cautionary tale.

It’s not just our current spending that makes money seem like it’s flying out the door. It’s also coming to terms with money we spent on stuff that is no longer useful for the life we will want to lead. Like the money I spent on my lovely turquoise velvet swing coat. And my vintage Frederick and Nelson raincoat that I bought years ago. I love these things, but there is no place for them on a boat and frankly I don’t wear them much. They didn’t sell at our garage sale, and I have been unsuccessful selling them on Ebay. 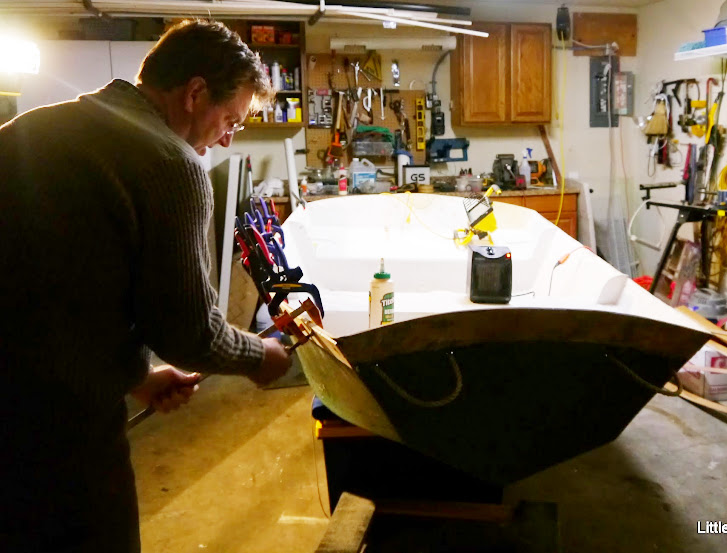 Mike’s working on repairing Puddler, hoping to sell it to a new home. We love this little dinghy. It has come along on many adventures. See that garage? Still a lot of work to be done there.

This brings up the concept of ‘sunk costs’, which is something we’ve written about before. I’ve held onto those two items, as just one example, because I know if I can find the right market for them, they will sell and I could recoup probably what I spent on them. But it takes a lot of time and energy trying to sell stuff. Craigslist was a dead end and I have better things to do than to field calls from people who will never follow through.  And even though Ebay makes it dead simple to list items to sell, you still have to photograph, figure out shipping, do the listing, then wait for things to sell. At this point I’ve decided my time is worth some money and could probably be better spent doing things like writing this blog post telling you to just cut to the chase and give most of the stuff away. Those costs are already sunk. Kiss them bye bye.

My favorite photo of Puddler, circa 2010 in Barkley Sound.

I’d like to say that money is coming in at the same rate it was before, but this would be a lie. At the same time that we’re spending so much money on the house (which, to be fair, we’d also have to do in order to sell the house), I’ve gone into semi-retirement from my practice as a psychotherapist. This has been in the works for over a year, but now that it’s happening it’s a very scary proposition.

I’ve begun seeing people on a cash-only basis, rather than continue to bear the responsibility of billing their insurance for them. I knew this would cause a decline in my client population because people would generally much rather feel as though they are getting something for nothing. And, after all, as a population we’ve been trained that the ‘doctor’s office’ will do that paperwork for us, especially as insurance is a complex dark hole into which most people don’t wish to wander. When clients have to pay up front and then send in a receipt for reimbursement, well, let’s just say that separates ‘the men from the boys’, as it were. Still, even though my salary is a fraction of what is was six months ago, letting go of all these kinds of land-based ‘contracts’ is required in order to move forward. Cutting back my practice may seem like the right thing to do overall, but it sure doesn’t feel right some days. It’s more like I’m hanging onto the end of a rope with one hand and have not yet located the net that is supposed to be under me.

Freshly painted second bedroom. Last year at this time it was my art studio. Kind of miss that.

We’re at the point where we can see the weather changing in the distance. The barometer is dropping in our comfortable middle-class suburban lives. I think we’re as ready as we can possibly be for the changes that are coming. We have a storage unit at the marina now. I finally found an insurance agent to help us with all of the new insurance needs we’ll have. I meet with him on Monday to look over the bid.  I met today with a friend who will do the gardening and housekeeping between renters. We’re working on a website for the house, and on a ‘users manual’ for the home systems. The next step is getting the house on the market, which will happen at the end of this month. After that, we wait to see if the booking calender will get filled. If and when that happens, it will be a wild flurry of activity. Keep your fingers crossed for us!

We gave Andrew an entire apartment of furniture. Where did we put it all when it was in our house? We like this room better now.

12 thoughts on “The Color of Blood: A Cautionary Tale”