Christmas is coming. For most people, December 25 is a good enough day to celebrate gift giving in whatever form. At our house, Christmas has come early. That’s right, Mike and I already have opened our Christmas present to each other because Santa surprised us early this year. He came to our house from his house in Minnesota. He came in his truck with eight tiny horses under the hood and a truck bed full of spinnaker. Here’s how that happened.

Deploying the spinnaker from the forward berth. A dream come true for this man.

Once upon a time, a long time ago, the previous owner of the boat, with whom we are friends, had in his possession a beautifully made spinnaker. It had been made for our boat by a mystery previous owner (Our boat has had a number of owners.), and came stowed cozily in its magnificent sail bag. The sail was practically new and when times grew hard, he sold the sail to his brother, who sails a boat of similar size in Bellingham. Or rather, he owns a boat of similar size in Bellingham. I understand there isn’t a lot of actual sailing going on.  So when we bought Galapagos, she had not seen this sail for a few years. Like a family heirloom, it had been stored safely away from the light of day, probably in the marine equivalent of the brother’s attic.

We’ve been talking about wanting a light air sail, but, you  know, $$$$. We sure could have used a nice cruising spinnaker this summer when  light airs were all the rage along the coast of Vancouver Island. Little did we know Santa John was listening.

It’s like a large larval organism. Or perhaps a tape worm.

A couple of weeks ago John (the PO) traveled from his home in Minnesota to the Bellingham area. He repossessed this sail from his brother and brought it down to us, offering us a great deal on this excellent sail that has hardly seen the light of day. This thing looks brand new. It has a beautiful sail bag that fits exactly between the rails at the bow, and a sock that makes it dead easy to deploy. We took the sail with the understanding that we’d look it over, deploy it on the boat and then make a decision about whether we wanted to buy it from him. He left it with us and tootled on along his route. Ho ho ho, Mike and Melissa! MEEERRRYY Christmas!

When Mike came home and looked at the construction of the sailbag, he began fingering the sail, a glazed look coming over his face. It was the gaze of lust. And this time, I was not the target. This was sail lust. I knew right then Christmas was upon us. This sail would have to be complete crap to avoid becoming stored in our forward berth. And I knew that this sail was not a piece of crap. Visions of our checking account balances danced in my head. Sometimes, you just have to go with a great deal, especially when it would break someone’s heart to pass it up.

This past weekend we had sun and very light wind. We decided we’d tape those hatches, and then for dessert we’d play with this spinnaker and see what it was like before the sun went down.

So if you read our previous post and looked at the photos, you’ll notice who was doing all the work. That’s right. I was. This is because I cut a straighter line than Mike does. I am the tape installer.  So Mike played the role of ‘warm body’ whereby he cleaned the lenses and the hatch frames, readying them for the taping. Needless to say, he got restless and bored. Cleaning the lenses and frames and policing the deck for garbage from the project just wasn’t enough stimulation for his large mammalian brain, and pretty soon I realized that he was no longer looking over my shoulder. Then, I heard the sound of a halyard being surreptitiously raised.

“What the heck do you think you’re doing?”, I asked, hands on hips, knowingly. Yes, knowingly, as the larval sail was already halfway raised.

Caught red handed, he could only look sheepish (and GUILTY)  as I laid out my thoughts on people who started playing with new toys that are mutual property while other people are on hands and knees wielding a sharp cutting wheel and shiny tape. I was dealing with flashbacks of Christmases past whereby Santa left toys meant to be shared with my siblings. Ugh. Bad Santa!

This was NOT the plan. Tape first. Playing with new sail second so we could both enjoy it. And no, I cannot ‘tape faster’. This has to look decent or we’ll both hate it. Simmer down, my friend, simmer down. 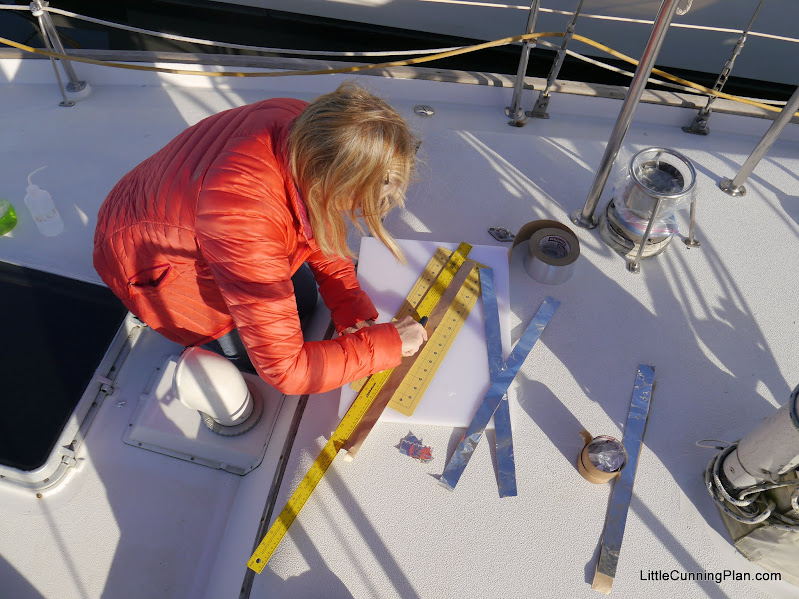 I submit to you that this position is much less fun than raising a new sail.

“Put that sail back in the bag, Boyte. You don’t get to see what it looks like and have all the fun while my knees are killing me. What are you thinking? What unmitigated gall!”  Justly chastised, he put the sail back in the bag. Sometimes this guy just kills me with his cuteness over things like new sails. I have to be strong like Badger, even justifiably indignant. Someone has to have some discipline around here.

Having never owned a spinnaker sock, our previous experience with spinnakers has not been exactly delightful. We cruised with our spinnaker on Moonrise on a number of occasions, but it was always a lot of effort to get the sail up correctly and tacking was probably a pretty good show for anyone sailing close by. Raising the spinnaker was one of the occasions on that boat when I might have been heard sighing in acceptance of my fate, secretly asking in my head, “My God. Why can’t we just sit here and go .5 knots and be happy? Maybe there will be whales to watch.”. This spinnaker is much different! 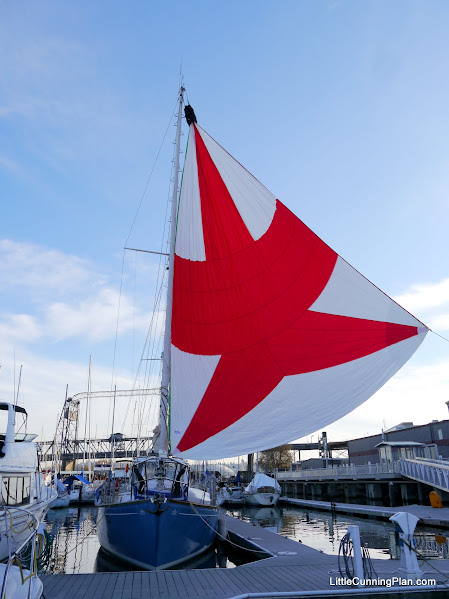 Beautiful! We can’t wait to fly her on the water.

Up went this sail, and we both were delighted not only with how easy it was, but how beautiful it is as well. Wind was only about 2 knots and the sail was filling easily, tugging Galapagos in her slip. Sadly, late fall offers only short days and the sun was already dipping below the buildings in Tacoma.

We’re using red as our trim color for Galapagos and the sail is red and white, just lovely really. We plan to replace the lifelines with soft lines and I’ve been thinking red to match the lettering on the stern. Yeah, I know. I’m already decorating with this sail. Still, nothing like being a pretty boat out on the water and red is such a holiday color. Happy Christmas to us!

Want to see how easy this is to douse?  (Sorry about the sound. A train came just as we were filming. Our marina is very noisy.)

We hope we use this sail more than any of the previous owners did. It’s a bit of a mystery where this sail came from, but we’ve been in touch Derek, another previous owner, and he’s never seen it. We think that leaves only the owners who sailed her to Mexico. We’ve contacted North Sails to see if they can look it up by sail number, but no response yet.

It’s a lovely thing, and we have visions of a beautiful downwind sail with it. How that plays out in reality we shall see. What do you think? Will we use this sail? When a piece of equipment this nice practically drops into your lap for literally a small fraction of what you’d pay to have one made, you don’t turn Santa down.