An unusual sight around here.

What’s the saying? ‘Neither snow, nor rain, nor heat nor gloom of night…”  If you think that is the official motto of the Postal Service in this country, you would be wrong. That is the official motto of the owners of S/V Andromeda. That’s us. Except fot the heat part. There is none of that, so just substitute the word ‘sleet’ and you’ve got it. During Snowpocolypse 2014, we are truly in the proverbial ‘winter of our discontent’.  With Mercury firmly in retrograde, slowing everything down and putting all kinds of roadblocks in paths, I’m practicing my cat-like waiting and watching mentality when it comes to getting anything done. I understand that’s the lesson of Mercury retrograde periods. Introspection, patience, acceptance. I’m not good at some of those things, but I’m trying. So progress of any kind lately has been slow going, for sure.

And that includes posting to this blog. Because my computer has died. Again. Thanks, Mercury. I’ve decided to name my computer Lazerus because Mike has had to bring it back from the dead so many times. I wonder what that means I should be calling Mike. So I’m posting this from my little Asus netbook, and it’s slow going. Mercury retrograde is no time to be trying to get computers to work outside their comfort zone. I THINK I finally got Picasa to work but we’ll see. I know computers are supposed to make our lives easier and all that, but really, I could have mailed a roll of film and had it developed and mailed back in the amount of time it got me to get Picasa to work, and with a lot less cursing.  Plus, I wouldn’t have had to agree to allow Big Googly Brother to know where I am at all times and when I go to the bathroom and whether it was number one or number two before getting my photos. Google Plus. REALLY?   Why not just ask for my firstborn child? The Red Blooded American in me screams in protest at these instrusions into my privacy. Discontented, indeed.

But, computers aside, there isn’t much to report on progress in the Andromeda arena. My prediction is that she will not be back into the water until the third week in March, anyway. We keep going down to Astoria, but it’s now more of a ritual and a feeling that we need to check on her than to actually get much done. This weekend we traveled down, deciding to spend the night in our friend’s ocean cabin in Long Beach rather than spend the night on Andromeda. That was a very wise decision as Snowpocolypse 2014 hit about 30 minutes after we got the heat turned on. We had a cozy evening in front of the gas fireplace, eating popcorn, watching movies, and relaxing. Mike braided my hair. That part was kind of pathetic, but fun.

Mike uses his laser vision to look for Andromeda on the far shore of the Columbia River.

You know how you can just tell when things are not going to work out as planned and you have to be flexible (code for ‘sailing’).  That’s what we were dealing with this weekend. First the snow. Then when we arrived at the boat yard, we had no automobile access to the yard. There was a fancy new security gate that we had to open with a special card; the kind we do not have; because no one has bothered to give us one. Who knew? I’m all for security at the boat yard, but somehow I kind of thought that since we are paying for the use of said yard, we’d, I don’t know, be IN THE LOOP when it comes to receiving things like key cards. The previous week we had no access to the bathrooms because they had changed the security codes and failed to tell us. If I didn’t have high self esteem I would think it was a personal affront. But I believe it’s just poor office practices

So we parked in the upper parking lot, climbed down the cement retaining wall into the boatyard (oh yeah, that security gate is REAL secure) and climbed up onto the boat to find that she was suffering from snow standing on the decks. Know this: you will know every leak in your boat when snow starts to melt on your deck. Ugh. Warm weather cannot come quickly enough for me so we can start getting some of these things fixed. With the temps hovering around 34 degrees, it was simply too cold to work effectively. Stainless steel ladders are very cold and slippery in that kind of weather. We went to the Columbia River Maritime Museum instead. An excellent and safer choice.

The front window exhibit at the museum. Yikes! Very dramatic to be sure.

If you’ve never been to that museum, it’s totally worth a trip to Astoria to go. It’s small enough to see in an afternoon, but the displays are very cool, even if disturbing. Of course, many of them are all about the ‘graveyard of the Pacific’, as they call the Columbia River Bar. I talk myself off the ledge about that by focusing on how many boats cross that bar safely every day, and knowing we’ll wait for the right window to try it. It’s all about the window of opportunity. Still, the Coast Guard averages more than one rescue per day per year in this area. They are busy folks.

All this stuff, much of which is unidentified still.

Since we last checked in with the blog, two things have been accomplished: First, we brought home all the various containters of screws, bolts, nuts, and assortments of pieces and parts stored hither and yon in Andromeda. We stashed them on the dining room table and I commenced to spending my evenings sorting them and organizing them. The screws and such were easy, if numerous, but the parts and pieces had us scratching our heads. Many things are unidenifiable, making us fearful of throwing them out, but not knowing if we really need them. Anyone know what these things are? 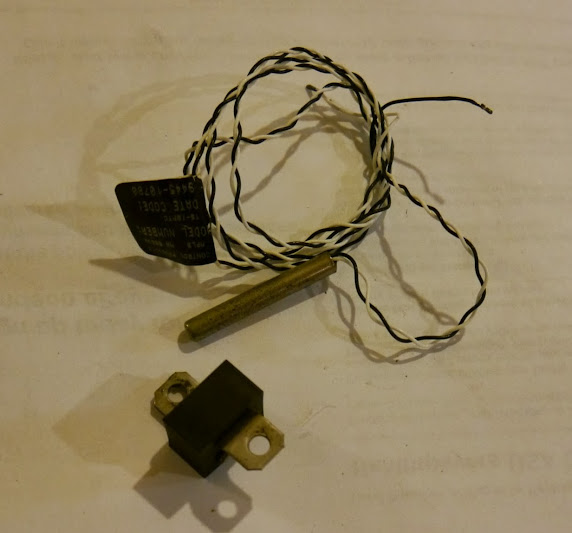 We probably kept too much, but you never know when someone in an anchorage somewhere will need a plastic knob with a screw on one side or a piece of aluminum with three holes bored into it in random places. Some people might see these as trash. We see these as karma kitty material.

The other thing that happened is this:

Now we are waiting for the weather to warm up, for our propeller to get here, and for Mercury stop being apparently backwards. We can’t have that fiberglass repaired until the weather is a little warmer. Maybe by the time we get her back in the water our dock will be repaired and we can put her into a protected slip rather than at the commercial dock where she has been since the piling fell over. Until then, we meander through this winter and try our best to be contented.

22 thoughts on “Meandering Through Mercury’s Winter”