We’ve been writing this blog now for over 4 years and it’s been a lot of fun for me to record this life transition. Looking back at our earlier posts I am sometimes stunned at all the progress we’ve made in these years and at how much the blog has helped keep us on track.  What started out on October 8, 2011 as a way for me to keep a kind of on-line diary turns out to be something I actually like doing. Except, at times,  for the coming up with ideas part. Love this photo of Galapagos out on Commencement Bay last April. Photo taken by the good people of S/V Elsa.

Especially when there is nothing cool going on down at Galapagos, I can hit considerable dry spells where life just doesn’t seem interesting enough to write about. If you write, you know what I mean. Real life is just filled with all kinds of what I call ‘beige’; things that are really the neutral backbone of living and bring everything together, and yet they don’t actually get noticed. Most of life is lived in the ‘beige’, and yet we write mostly about the ‘red’ moments, the moments that make everything else go ‘pop!’. (Photos from our cruise last year because how else would I illustrated this post? These are photos of the ‘beige’ parts of cruising.No drama. Just living.) 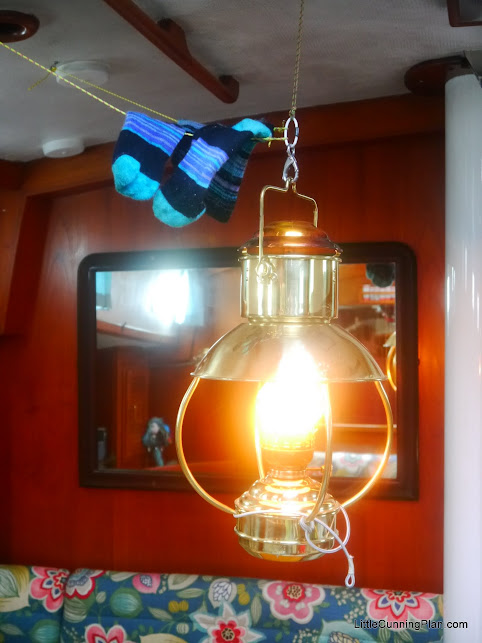 How we dry our socks aboard Galapagos. Yes, we are careful.

To keep the writing mojo going you kind of have to get ‘creative’ and you need to have a serious supply of ‘butt glue’, a term first revealed to us by a successful published author, years ago. She said this was her secret. You have to glue your butt in the chair, put your fingers on the keys, and compel them to move.  I remember that term every time I sit down in front of the computer and wait for inspiration to hit. It’s a little bit of what I’ve termed ‘Nike Therapy’. You “Just Do It”.

Lately I’ve made space in my life by cutting certain things out of it. I’ve written extensively about all the junk we’ve given away to other junk collectors and to charities. I’ve released my contracts with insurance companies and commercial office spaces in my work and chosen to work as a Life Coach rather than a Psychotherapist, freeing up much needed psychological space and energizing my practice. But nature abhors a vacuum and now I have internal space to fill. It’s like clearing out a room in your home. What will you do with it now that it’s empty? The possibilities are endless.  I’ve decided I need a little more of a challenge for myself in terms of writing. I need to up the ante a bit, and have a little more pressure to bring the blog up a notch. Well, actually, it’s more about bringing my own development up a notch, but if the blog benefits, that’s all to the good. 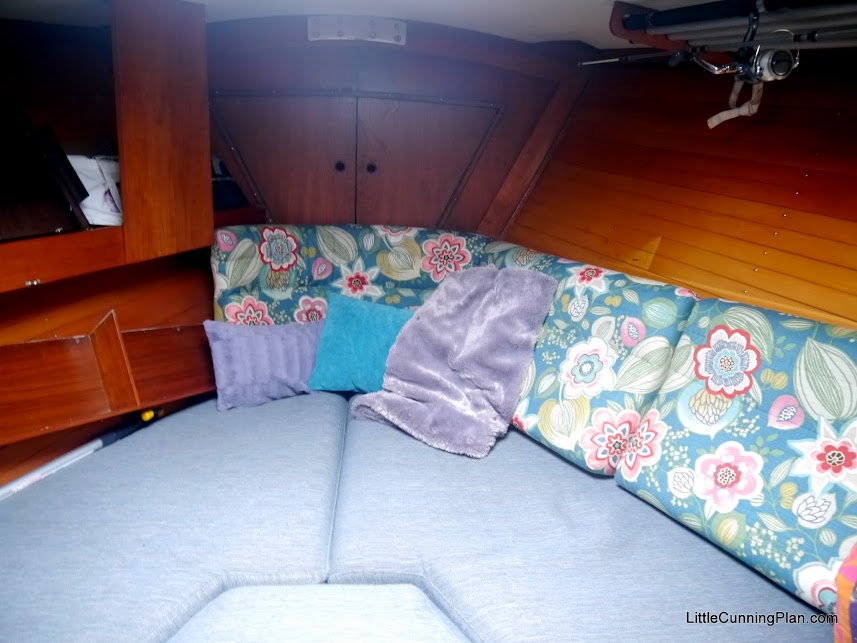 Getting creative in the forward berth. This will be the ‘rumpus’ room and the guest room.

I religiously read The Cynical Sailor & His Salty Sidekick and also SVCambria.com.  Both these bloggers do what’s called Blog Challenges. The idea is that some alpha-blogger out there in cyberblogland gets a God complex, or maybe they just are gluttons for punishment. Said blogger then sets up some kind of rules about what you blog about, then they hit ‘go’ and a bunch of bloggers sign up to follow their rules and begin writing their little hearts out. Must be a powerful feeling! I mean, you should see the list of blogs from people who want to get on board with being challenged by rules! There are more blogs on that list than there were people in any of my graduating classes. (Note: Little Cunning Plan is number 970 on the list.)  But I have been intrigued. Am I a blogger? Can I be challenged? Do I want to do this? Am I commitment phobic? The answer to all of these questions is yes. I am, I can, I do, but I am.

Ah, commitment. That last one is the biggest hurdle for me.  When Ellen, over at Cynical Sailor, announced she was doing yet another blog challenge, the A to Z Challenge, that little voice that compels me to obey started yammering in my head. “You must do this. This would be great for you. You have plenty of time to devote to this. Just look at all the empty space in your psyche! This is the time. Just do it. Stop procrastinating you lazy female. I don’t want to hear excuses.”  Really, this voice is like every gym teacher I ever had in any school anywhere.  Apparently I needed to get my butt glue out and just do it. Yes, it would mean committing out loud to something that would take time. Yes, Mike and I are traveling to Washington D.C. in early April, the very month of the challenge. Hmmm.

Breakfast. I made these crustless spinach quiches and froze them. No muss. No fuss. Plenty of protein.

Of course, I didn’t go down without a fight. I’m much too willful to simply obey without questioning. I mean, I have never even played a team sport!  And there are many good reasons for that. We should all be grateful I passed those up. I argued and used logic. I put my hands firmly on my hips. I stomped around a lot. I threw that voice more insults than a Republican at a ‘debate-ish’ type of event. But it was like my own arguments didn’t even register on the voice’s little radar. It’s like this voice thought I had nothing better to do. Sure, I actually don’t have anything better to do right now.  But still, I was a whiner and didn’t give in. Until Ellen said Stephanie over at SV Cambria was going to do it, too. Well, crap then. The gauntlet was thrown down. Okay, fine. I’ll do it.

And now I’m excited to get started. Sometimes commitment to is like that. You resist for no good reason except sheer laziness and the feeling of power of getting in your own way, then once the promise is made, it’s all good and that yammering voice simmers down for awhile. So get ready for daily (except Sundays, a day of rest as the good Lord intended) blog posts in the month of April. I’m already writing them in my head and guess what else? There is a theme! The theme will be revealed on March 21, because I’m trying to follow the damn rules, okay?  Should be a fun month.

Enjoying the aft deck after we removed the huge bulk that was the old life raft. Clearing space is good.