Tis the season. Or almost. Our transitional Northwest Weather is upon us once again and you know what that means: Rain. Yes, we all better get ready for winter and the wet it brings. 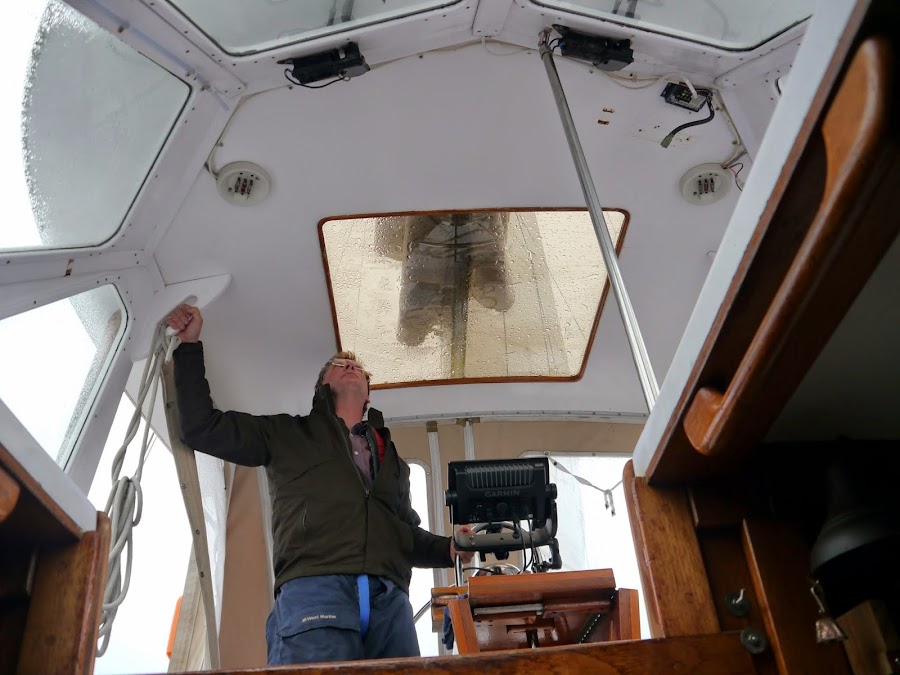 Snug inside the canvas enclosure.

One of the best things about Galapagos is our dandy cockpit with the nice hard dodger. It really extends the space for outdoor living. When we bought the boat it came with an old but still serviceable canvas enclosure. Someone put down some serious money on this thing and when it was new, I’ll bet it was hell for stout. Over the many years, however, the UV has taken its toll, and it has shrunk up a little, meaning that the panels are about an inch too small on the sides now. Stretching them to fit means they must be wet down, and even then, my hands cannot handle the task. Those snaps are too far apart and it’s already beginning to tear in many places.

We need the enclosure during the winter. It does a great job of keeping the cockpit dry, which will helps us keep wet foul weather gear out of the boat interior. It also helps contain heat. The cockpit becomes like a little sunroom, minus the sun on a normal day in winter. But once the enclosure is set, getting in and out of the cockpit is a PITA. You have to unsnap, squeeze inside then try to re-snap, which isn’t going to happen. We usually just leave the panel corner flapping around. And that doesn’t do much good with rain. Something had to be done. 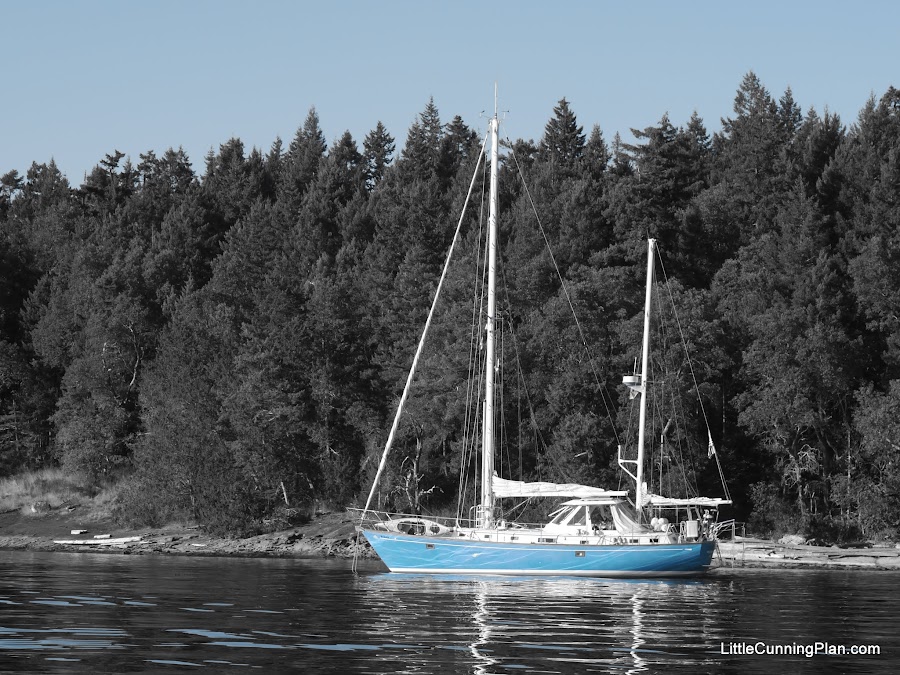 At anchor in the Gulf Islands. She has the rear part of the enclosure attached.

We kept thinking we’d get a new canvas enclosure, but sheesh! $$$$. Also… Mexico. Are we really going to use this particular kind of enclosure once we are south of the cold and wet? Wouldn’t a more lightweight one be better, preferably with screens? We decided that a new enclosure was not on the ‘need’ list. We can wait until we are down south and then see what we actually need.  But what about this winter? I kept looking at that pile of canvas in the storage unit and thinking ‘I could do this myself’. When Mike, looking tired, asked me how much he would need to pay me to NOT take that on, I should have listened rather than feeling challenged. Really, sometimes you’d think he’d know better.

When designing a cheap boat trick, it’s important to keep in mind the goals. In this case the goals were easy: keep the rain out, keep more light in, make it easy to deploy, and do it myself. You’ll notice that one of my usual goals, attractiveness, didn’t make the cut. Good thing, too.

I went to the Canvas Shop in Olympia and took one of the old panels with me. Discussing our needs with the owner there, we decided that since I needed to get only 1 season out of the thing,  I could make do with heavy rolled clear plastic and marine grade canvas. This was something my sewing machine and skill level would be able to handle. $83 later I left the shop with ideas forming in my brain.

I would repurpose the attachment system at the top of the panel because that still worked well. It’s a heavy bolt rope that feeds into an aluminum channel on the hard dodger. I would remove the bolt rope from the old panel, preserving the panel as well as possible just in case I needed it later.

This past weekend I decided to dive into the project. It was, in a word, irritating.  On the whole it was a dissatisfying project from start to finish, but at the end, I have something that MIGHT last the season. And the goals of being easy to deploy and getting more light into the space are met. My home economics teacher would hang her head in shame at the stitching, but this project pushed my little Brother Runway to its limit.

For all you folks eager to take this project on, here is my hard learning: Hire someone. That plastic is the devil. The needle will go through easily enough, but it would have been made much easier if I had a LARGE workspace where the stuff could lie flat. This is because as the plastic tries to drape over the machine and hang down, it grabs onto everything in sight, keeping it from feeding through the machine smoothly. I was seriously cursing before the first edge was complete.

In addition I’m sure there is some trick of the trade for keeping the canvas edging in position on the plastic while you sew, but since I’m not in the trade I don’t know what it is. Maybe there is something on Youtube. You do the Google, because I’ve decided I’m making only one of these, not two.

Know what else would have made this easier? Hiring someone else. OK, no really, an industrial sewing machine like a Sailrite, with a walking foot. If I were to post this project on the Sewing On Boats Facebook page, I would get a lot of very annoying comments about how I should just buy a Sailrite, all from people who are part of the cult-like following those machines have, and all from people who are not privy to my bank account. Know why I don’t have one? Because I’d rather spend the money on something else. I’m not ready to commit to doing canvas work, even though I seem to be doing just that. If I spend that money on a sewing machine, someone is going to be expected to use it and I’m probably that person. If one fell from the sky, I’d take it, but until that happens, I have many other things to buy that I’m going to use every day, like a new sail track system for that main sail. Some of us have to prioritize.

Finally in place. Just don’t look too closely at the handiwork.

So what will we do about the rest of the cockpit? I will put the old canvas cover up and get it situated somehow, repairing by hand places that are coming apart due to UV exposure. We only need one more season out of the thing, and we will just have to go in and out of the cockpit through the port side. This project, while cheap and tricky, just barely comes in over the finish line as a win. Hey maybe I will get to that peeling teak during our next sun break.

This drain stood way proud of the deck. Water never drained there. It was a problem.

On a more positive note, Mike took out that deck drain that was standing proud of the surface, keeping water from draining correctly on the port side. Whee! I can’t tell you how excited I was to see streams of water disappearing from the deck. I still dislike the design, preferring to have water drain directly overboard through scuppers on the side rather than down into the boat and then out the bottom. Some day we will have those redesigned and those holes in the bottom of the boat filled in. But until then, this is so much better!

And as a follow up on this post, we heard from a previous owner of Galapagos who reads our blog and communicates with us about her history and the things he did to improve he. He added that lovely hard dodger and had some words of wisdom for us.

“Looks great !!! Wow what great work. However!!! First of all those side curtains were a godsend at sea when stormy weather or just cold wind made it uncomfortable to be on watch. Spend the money on those to make sure they are the best. As far as screened curtains I had a full set made for the no-Seeums that bugged … Pardon the pun …. Us on the South Pacific and the masses of flys in the sea of Cortez. Did we use them??? No …. dispute being able to kill up to 5 flys with one swat in Mexico we decided that the air flow and light cooling exchange it provided in 100 plus heat was more important than the lack of bugs. Spend the money on weather rain and wind resistant canvas and forget the screen stuff. It should be still on the boat or maybe the previous owners saw the light and sold it or gave it to some unsuspecting cruiser for a cold beer. Those canvas side and rear curtains were the best after two tries and one canvas curtain maker running for his life after me kicking him off the boat and threatening him with close to death if he ever set foot on my boat or considered suing me for lack of payment. The hard dodger was designed by one of Bill Garden’s staff and myself and built to exacting standards by Philbrooks in Sidney to the tune of $32,000 ….later reduced to $20,000 after a bit of angry discussion between us. Enjoy it !! It is solid teak and probably now worth more than the whole boat.
I sure hope I get to see you and all the great things you have done before you head south… I loved that boat more than you will ever know.
Cheers
Derek”

It’s so lovely to be able to get some history from Derek and we, too, have found those side panels to be worth the effort required to use them. We plan to have the whole thing redone in Mexico where we might be able to afford to have it done for much less than it would cost us here.