As summer approaches with us unable to go on an extended cruise, we are chomping at the bit to be out on the water. The Universe has presented us with the opportunity to go sailing each week and to learn a bit more about sail trim. We are crewing on a C&C  40 named Blue Moon. She races every Wednesday night in Commencement Bay in the PHRF class, which means she flies a pretty spinnaker during the downwind leg of the race.

We feel really lucky to have places on this boat. The captain is very experienced and even tempered. He has primary crew who have been sailing with him on this boat for years. They know the boat and each other very well. In general it’s pretty hard to enter a group like that and feel like you are a part of the team. But they were so welcoming and patient with us, teaching us about the boat and giving us jobs to do. Mike and I now know how to properly pack a spinnaker. Mike is working the foredeck (a place where I quickly learned that I do not belong on this boat) and I am working the cockpit. I help with the main sail, and loose the foresail lines on a tack. Mike’s been thrown into the fire on this boat because he’s a guy and they can use another guy on deck. Good thing he’s a quick study.

Last weekend we did the Race Around Vashon Island on Blue Moon and it was an excellent day for sailing! We had good wind for the entire race, and with sustained wind building to about 16 knots with gusts beyond 20 knots on the down wind leg, there were some exciting times getting the spinnaker down and changing sails. Here are some photos from our first two races, and some of the lessons we learned, or re-learned.

We’re looking forward to our Wednesday nights on the water this summer. Tonight it looks like we’ll have terrific wind and sunny skies! Let’s go! 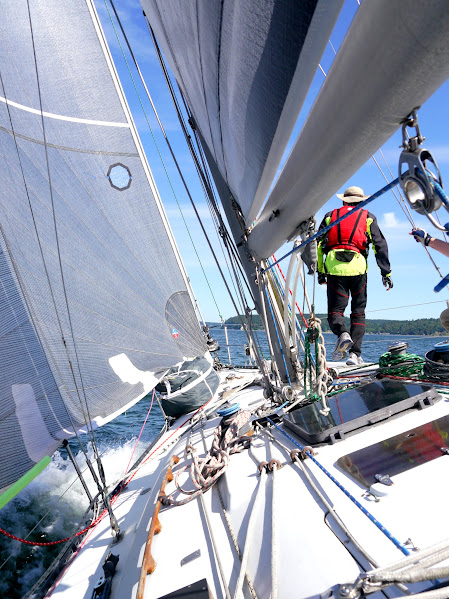 14 thoughts on “Our New Summer Gig”