With heavy heads and spirits hanging low, we started home from our last anchorage, D’Arcy Island, in the morning on July 30 and by 4:00 in the afternoon on July 31 we were safely back in our slip at Foss Harbor Marina in Tacoma. We missed our family and friends, but wish this trip could go on much longer.

Finding my groove on the back deck.

Wait, July 31? That’s correct, you read that right. It took us less than two days to get home. Have we ever mentioned that this boat is a lot faster than our previous Cal 34? Our bodies are still timed to the Cal in so many ways. It takes us aback when passages are that much faster. Coming around Pt. Wilson with current and wind in our favor, we had speeds upwards of 12.5 knots. What a sensation! So we’re back, the party’s over for now, and it was a terrific trip fraught with beautiful scenery, PNW wildlife bingo, fine tuning what we want out of this boat, introspection, and yes, even fun. Our cups runneth proverbially over.

With friendly hands to help grab dock lines, Mike absolutely did not hit the big Vagabond ketch the marina docked next to us in our slip. I did not throw up, and I don’t think I lost any years of life this time due to stress, in spite of all the times he had to back up and tweak the wheel. Another successful docking.  We decided to spend the night at the marina to have plenty of time to get the boat cleaned up and to get used to being on land again. Man, it is noisy here. We hate this noise. And talking to my mom on the phone yesterday when we were sailing in, she was stuck in wall to wall traffic from Chehalis to Kirkland. Man. We hate traffic. To celebrate, or perhaps to anesthesize, being back in the fast lane of our land life, we walked down to The Fish Peddler on Dock St. and overindulged heavily. Damn, that Jalapeno Pineapple Margarita was delicious. All this noise activity; no wonder people drink. 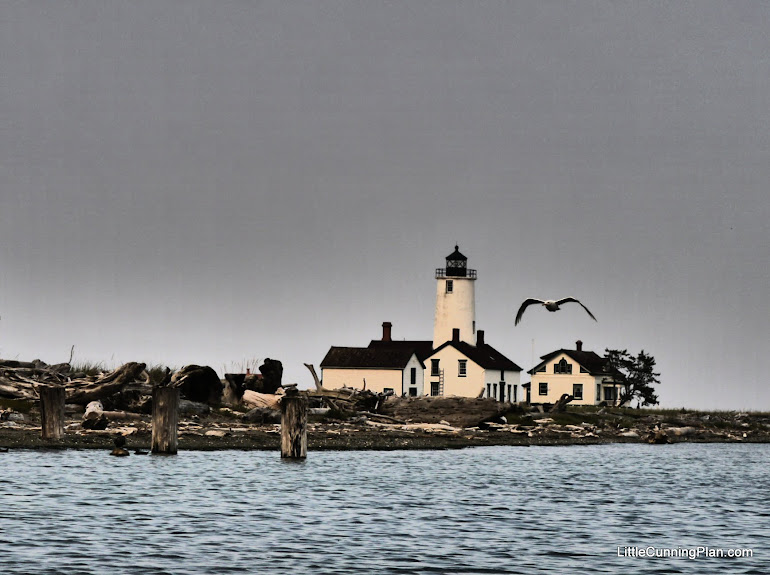 We usually anchor at Dungeness Spit before crossing the strait. It’s so peaceful there. No alcohol required.

So now that we are here we get to compare notes about the trip and I have an entire notebook of a cruising journal to reference for posts and for lists. I have so much information it will take me while to get it sorted. We have a lot to tell you.  But let’s start with gear. Everyone always wants to know what works and what doesn’t and why before they buy things for a boat. So here is a partial list of small  ‘wins and fails’ to whet your appetite for the posts coming your way in the next few weeks.

1. Marriage Saver Mariner 500 headsets from Crusing Solutions.  These were so useful it makes it a damn shame that Cruising Solutions doesn’t sell them anymore. We probably got the last pair because when I went to order them I found that they had been discontinued and replaced with an expensive pair of Bluetooth headsets. I was so disappointed I emailed them and they offered me a pair without a box and with a limited warranty from their back stock. So great customer service, anyhow!  I took them up on it and am so glad. Here’s the deal: If Mike is at the bow and I am in the cockpit, we can talk to each other. If Mike is working on the hydraulic steering and needs me to turn the wheel, we can talk to each other. When docking, I can tell him how many feet he has before he hits the boat next to us. Yes, there was static on the line, but we could hear each other and you know, these are not cell phones.

This ability to communicate was priceless. But let’s talk about price anyway. I paid about 80$ with shipping for our set. Their replacement product costs $179. Apiece. As in, you have to buy one for each person. Sure, they are ‘Blue Tooth’. Sure they are modern and sleek.  Who cares? My boat was built in 1975. We don’t need no modern or sleek. Sure, you can use them for up to 300 feet away or something. Our boat is 47 feet long end to end. I don’t need 300 feet. I just need to be able to communicate without my hands and without yelling. I hope they bring back the original Marriage Savers. Not everyone wants to spend $400 on something they use only intermittently. This falls under the category of ‘it it ain’t broke, don’t fix it’. People loved those Marriage Savers. (No photo of us modeling these for you. If I tried to take a photo while we are anchoring or otherwise need them, Mike would probably have something to say about it and I probably wouldn’t like it.)

Testing out some fishing gear.

Contigo Stainless Water Bottles – We love these. I bought them at Costco as an impulse purchase because we were looking for a way to keep drinks cool and also an easy way to get enough water and avoid dehydration. We both love them so much I’m hoping to get more so we have extras on the boat. If not, I’m ordering them from Amazon. They went everywhere with us, do not leak, are easy to drink from with one hand, and even in the hot sun, water stays cool. A big WIN.

Arctic Cool Towel – Another impulse buy for Mike’s birthday, it was actually hot enough in our PNW heat wave to use these and in spite of my worries that these might be a ‘gimmick’, they actually work! Is this some kind of wierd magic that makes these towels nice and cold when you get them wet and give them a bit of a snap? It sure did feel good to have ones of these around the old neck when temperatures were in the ’90s. We got ours at Costco, but you can order them from Amazon.

Adorable little ‘Scamp’, built in Gig Harbor, anchored at Liberty Bay for the July 4 festivities. Couldn’t we have this as a dinghy? So cute!

Verizon phone plan for Canada.  Three words: Just don’t bother.  Reception was terrible, even in places like Ucluelet where there should be plenty of reception. And the data plan was laughable. If you want to update your Facebook application like we did, you won’t be able to post any photos or you will eat your data really fast, even small photos. With Verizon’s plan, you get 100 mb of data and when you go over, they just tack on another 100 mb for 10$.  That sounds good until you realize that you’ve used more than half your data in about 4 days. Even after turning everything off on the smart phone, an Iphone 5s, I eventually learned to just turn the phone off. At least I was able to text with my kids on occasion. I didn’t bother checking email, but Mike did on his phone. I kept the FB application page updated without photos but you’ll notice the updates to the blog stopped. That’s only partly because we were having so much fun. We will have a fat phone bill this month. I believe there must be a better way, and I’m going to find it before next summer.

Motorola rechargeable weatherproof walkie talkies of unknown model since it’s not indicated on the unit anywhere. These are a fail because the battery sucks. And since they don’t put the model on the unit, I now am suspicious of all Motorola radios.  When one of us wants to go rowing or paddling and the other one stays on the boat, it’s nice to be able to stay in touch. That way we don’t worry. But in order for this to work, you have to be able to leave your radio on. And that’s the problem with these. After about an hour, the battery is dead even when you start with it fully charged. So maybe I can see Mike in his little boat way out there in the middle of the channel, or maybe that is some other fisherman. Maybe he’s waving his arms at me because he has snagged a whale by accident and it’s pulling him out to sea. I’ll never know because I assure you the battery on the radio is dead. We will  need a better solution than this.

There’s more, oh yes, but I couldn’t wait to get back to posting updates, which we stopped doing due to the data usage and poor cell phone reception. I don’t know how people post to their cruising blogs all the time when they are actually out cruising. I see lots of people going to internet cafes but on this trip we were primarily in wilderness areas where towns were few and internet cafes even fewer. I’m in touch with Behan Gifford of Sailing Totem to see how they do things on their boat. (Read her latest post about minimizing data usage in exotic places.)  This is another little issue that needs solving before we cut the lines next summer.

D’arcy Island. Ready to go back there.

11 thoughts on “If This Is Your Last Beer, The Party Must Be Over”