Better sit down so you can deal with the shock of what I’m going to tell you. Be calm. Don’t get up and walk out, stomp off, or slam doors about this. Just hear me out. I know it’s almost a sacrilege to say that the Broken Group, as a rule, just doesn’t do it for you as a cruising destination. But with the exception of Benson Island, this group of islands leaves me feeling a little ‘meh’. Whew. Glad that’s off my chest.

Tide pool at Benson Island. The colors are astounding, and unmolested by software. This is really how they look.

Compared to the Gulf Islands in the Salish Sea, these islands look like they just emerged from the depths last week. There is nothing gentle or time-worn about these lands. There are precious few landing beaches, but plenty of big hull crunching rocks. True, the water is practically sedate there it’s so protected. So, in terms of a quiet anchorage where you can lay around and read, they are very hard to beat up there on the west coast. But there isn’t a whole lot of variety among them. To me, they kind of all look alike. I can only do so much kayaking among giant cedar trees before I’m ready for something different.  Yeah, sacre’ bleu, etc.  I like the Deer Group so much better.

Except for Benson Island. There is nothing sedate about Benson Island. This is one wild and cool place where all your senses will be engaged. Put that Kindle down, baby, because we’re going ashore!

For your comparison. Jarvis Lagoon between Jarvis and Jacques Islands in the Broken Group. No place to go ashore here. Not even a little bit unless you want to clamber around on slippery rocks.

Another tide pool on Benson Island. I never get tired of them.

This was our second visit to Benson Island. We visited in 2010 with our last boat, Moonrise, a Cal 34. The anchorage at Benson is small, with room for only a handful of boats and it’s not particularly well protected. There are many sharp and pointy rocks with big teeth, land sharks.  On the east side of the island is a cove with a sand and pebble beach complete with rocky tidal pools and the big driftwood people up here know and love.

View from Galapagos at anchor off Benson Island. Yes, fog coming in from the Pacific. High tide. Ocean is around the corner to the right.

With wind generally coming in from the sea, you are protected from the worst of the wind and swells, but be sure of your anchor holding before you go ashore. We anchored in about 30 feet, give or take 5,  with good holding and with plenty of swing room. We were the only boat there. Although our holding was good, it’s exposed enough at that anchorage that we always felt better keeping an eye on Galapagos and were pretty relieved to find her where we left her. Anxiety is a bitch. (Just FYI for other cruisers, we never leave her unattended until we are certain she is staying put. Unless the wind changes. Unless the current changes. You know the drill.)

Galapagos in her natural habitat.

Once on shore you are in old growth forest and can take a path toward the beach between Benson and Clarke Islands. From there, if you are in the mood, you can walk and climb along this beach to the woolier side of the island where the rolling Pacific meets the shore. This path takes you through a clearing with sedges and grasses to the site of the Tseshaht village that used to stand here. The Tseshaht people consider Benson Island to be the place where their people originated, so this is a holy island to them and it feels every bit of it. Some of the cathedrals in Scotland brought similar feelings up for me.

Up and into the wild woods.

Since our last visit in 2010, the tribe has installed a lovely carving representing the First Man. As a tribute, or perhaps as an invocation, people have left gifts from the natural world at his feet. We thought this was lovely and wanted to participate, asking the First Man for his permission to explore the island and for his protection while we did so.  We found an empty paper wasp nest and placed this at his feet with thanks for allowing us to visit this beautiful place. When an island is full of spirit, it’s best to acknowledge that with a humble heart.

The First Man carving. He is really a handsome statue.

Offerings to the First Man. I hope his spirit appreciates the wasp nest we found.

When we were there five years ago, there was a sort-of trail that crossed the island, although I remember pushing through some rather dense and tall salal at one point. At that time, camping had been prohibited for only a year.  Five years later we couldn’t find any kind of trail that crossed the island. Now that camping is not allowed, perhaps they are letting the trail go. You can push through brush to trudge across the island if you want to, but we didn’t want to leave Galapagos for that long.  And we are 5 years older. Maybe that had something to do with it.

During our hike on our visit in 2010 I remembered that we had seen a lovely buck standing in the sunlight, filtered through the trees. He had been standing looking down at us as we walked along the ridge that crosses the island. I decided to climb up to the ridge, using shrubs and ferns as handholds, and see if I could find a trail in that area. Instead I saw his grandson. Or maybe his son.

He was completely undisturbed by my presence.

We are never overly concerned about predators in the wild, but we ran across this scat and wondered what could have left it. This is a small island and has an obvious deer presence. We wondered if something was keeping their population in check. Do you know what this is? 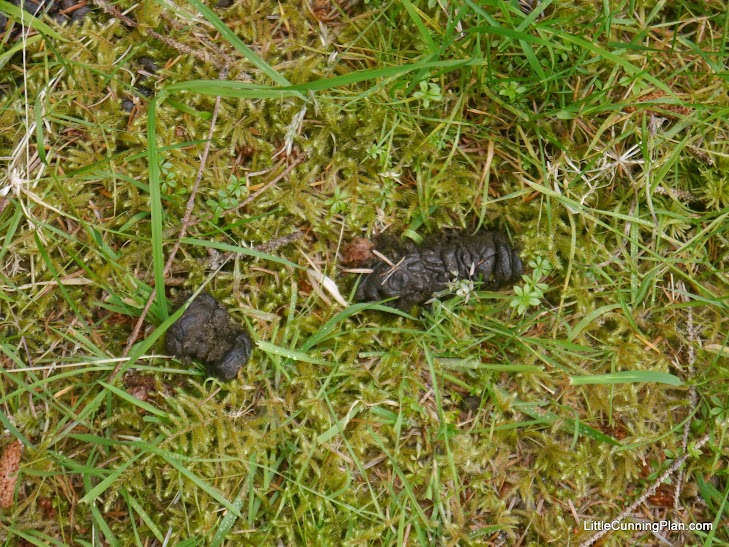 The larger piece of scat was maybe 4-5 inches long.

Something else precious about this island is that there are remains of petroglyphs on a rock outcropping near the anchorage. The outcropping is under the roots of a large tree.  In 2010 I discovered them as I was examining the rock and was completely taken aback when they kind of jumped into my view. I found them again easily.  They are a fascinating reminder that ancient people lived here. Archaeologists have determined that native people lived on this island as long as 5000 years ago.

Look closely toward the middle of the photo, a bit to the right.

Here’s a closer view. On the left/center you will see a salmon skeleton. On the right is a figure of a person.  Above and to the left of the salmon there is a sun. These are extremely faint and in person much easier to discern.

After checking into Ucluelet, a visit to Benson Island is a great way to start your tour of the Broken Group. But if you think the rest of the islands will be like this one, you’ll be disappointed. They are too protected, too new, and are not washed and scoured like Benson’s shores. Benson Island represents the best of the wild Pacific islands in this area, along with the Deer Group on the Bamfield side of Barkley Sound. Be ready for all your senses to tingle, and if the wind and weather is right, you’ll have a decent night’s sleep in this anchorage. Be sure to pay your respects to the First Man and give thanks that you, too, have the good fortune to visit this beautiful place.

8 thoughts on “Benson Island – Best of the Broken Group”