Happy Valentine’s Day, dear readers! Today is the day that lovers everywhere declare their undying devotion by spending money at Hallmark and hurriedly stopping at the Safeway for a box of Brach’s Special Edition Extra Corn Syrup on the way home. People have all kinds of ways to say ‘I love you’. Some people go have a fancy dinner and hope to have fancy sex later. Some people do the jewelry thing. Some expect candle light and a bottle of “Je ne sais quoi” or some other French words I can’t think of right now. But after 33 (I think) years of marital bliss, Mike and I have our own love language. At the Little Cunning Plan house, nothing says ‘I Love You, Baby!’ like a big garbage dumpster in the driveway! We were in for a delightful weekend of property clean up! Woo hoo! I’m a lucky girl! 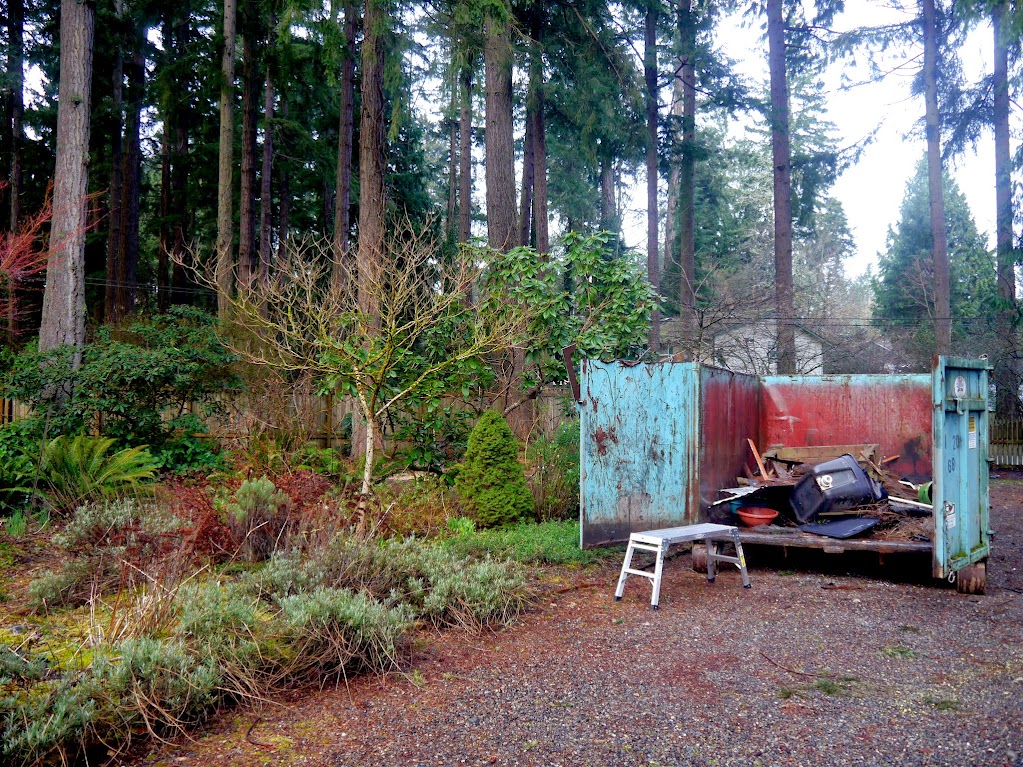 That’s right, ladies and gentlemen, we’ve been continuing on our quest to ‘make space’ for this life transition by throwing things out. What better way to clear out the work area of that pile of rotting lumber, that stack of plastic pots from plants, the remnants of the pond filtration system? How else would we dispose of the little shed that Andrew built years ago in the ‘Lothlorian’ area (which we call our small forested space)?

Goodbye cute little hut Andrew built in his youth. Goodbye lean-to that used to have firewood stored beneath it. Hello wide open places!

It’s the end of an era of letting Andrew go hog wild with wood, saws, nails and screws. We thoroughly enjoyed his industrious years of building things in this big back yard we have. And we miss the sound of his little hammer and Daddy’s drill, his archery targets, the tin cans with holes punched through them where the arrows hit their marks.  Gone are the days of large siege engines tossing big things across the neighbor’s fence. He was like a medieval warrior, or at least a medieval carpenter. They were built to work, and built to last. But we have our memories, fond and otherwise, and on occasion at the tender age of almost 23 he still lets loose a few arrows out back. But I am running amok down memory lane right now and that’s not the purpose of this post.

What is this day without flowers? Here’s one from the garden today. We have an early spring in the Pacific Northwest.

No this post is a Valentine’s gift to you, readers, because guess what you get to do now? Go ahead. Guess. I’ll wait.

Ok. You don’t know, do you? Your super surprise extra bonus gift of this day, because we love you and all, is to watch this great video of us deploying our life raft in the back yard. That’s right!!! I’ll bet most of you have never seen a life raft deployed, and the rest of you are asking yourselves why we would even consider doing such a thing. This is why: the people at the boat show told us to. 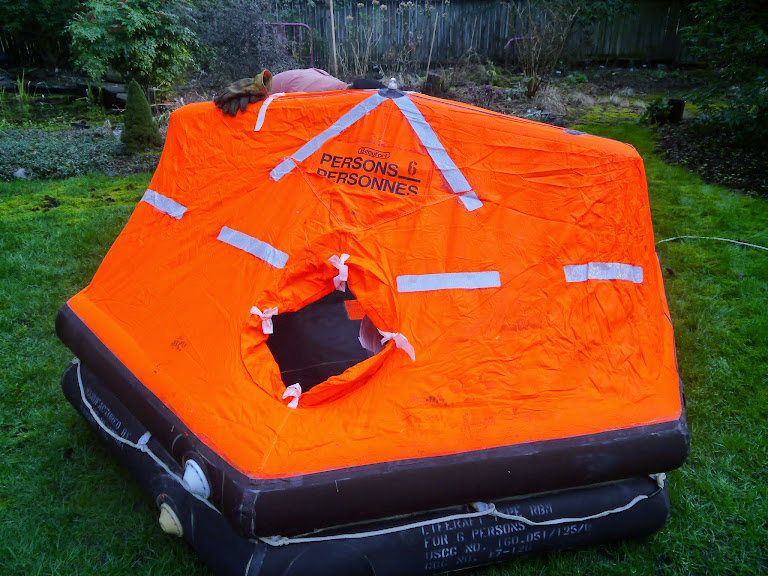 We had this life raft that was born in May 1993 and last serviced in 2005. Now frankly, we figured it was still good as gold considering it had been protected in the sturdy (and unbelievably heavy) case in its secure holder on the back of Galapagos for the last 10 years. No sunlight or water could get to it. I called around to some places that repack life rafts and none of them really wanted anything to do with it. You know the story: “Oh, you need to bring it in and let us look at it and then we can tell you if it’s any good.” But we couldn’t get a bead on how much this ‘service’ would cost us, or whether it would even be worth our time. For all we knew we should just fill it with those plastic balls and rent it out for children’s birthday parties.

It has been in our garage for a year or so now with us not knowing what to do with it. So what the hell. We had nothing to lose. We couldn’t dispose of it the way it was because it was considered hazardous material due to the canister of gas. And we sure weren’t going to try to sell it the way it was. The guys at the boat show selling life rafts were familiar with what we had and said that in its day it was considered a really good life raft. They said we should just set if off and see what we had.   We’ will likely have to buy a new one anyhow, so we just went outside and pulled the painter. And the rest, as they say, is water under the bridge.

It was a ton of fun, and almost like an extra Christmas to open up the ditch bags and see what was inside. There was plenty of loot, and most of it was still good. Get a load of this: 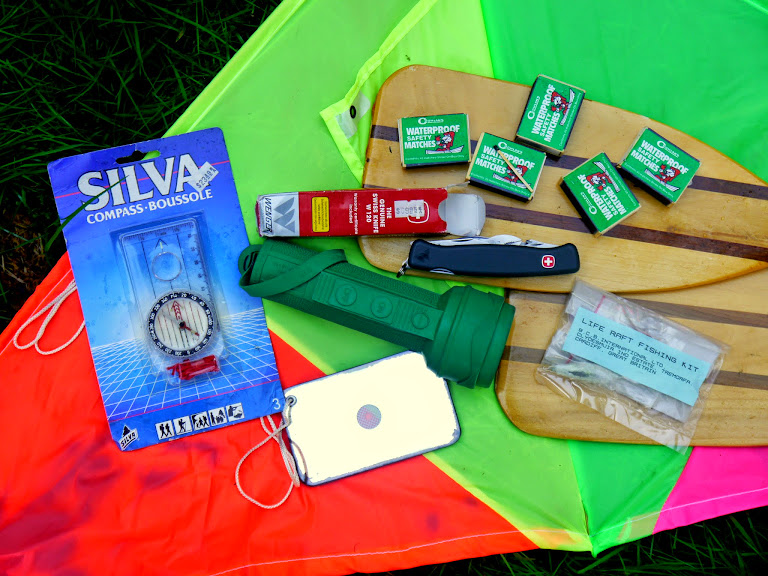 What we have here is a kite for signaling help, a very nice, brand new Swiss Army knife with every possible gizmo on it, still in the box, a brand new compass, a nice signaling mirror, two different fishing kits, waterproof matches (still good), two short wooden paddles, and a sturdy flashlight. We also found a lot of drinking water in pouches that was still perfectly fine, and a nice first aid kit with a number of items that can be used, and a bottle of sea sickness tablets. I guess those are toast by now. 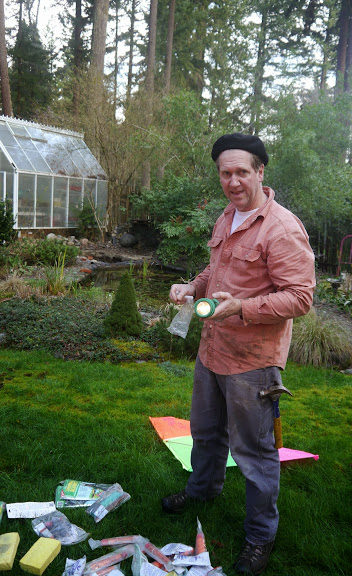 Look, baby! It works! Nothing says ‘Manly man’ like extra filth and a hammer hanging on your pants.

Turns out this is a very nice raft. In fact, it looks like it is just as good as the new ones we looked at, especially considering the chances of our having to even use it. There is a little light inside, and one on the top, and a kit with an extra bulb. There is a sea anchor attached, and it has weighted bags around the bottom to help stabilize it in rough seas.

A nice sea anchor, attached well to the outside of the raft.

And now what? We are hoping that if we take it to the same place that inspected it twice before, DBC up in Victoria, B.C., maybe they can service it again and put it in a different kind of case. If there is a way to salvage this life raft and use it, it would save us about 2000$, minus the cost of servicing and repacking it. If you know a resource for us, please comment. If we’ve killed it by deploying it, oh well. We figured we’d have to buy another one anyhow. There is always the children’s birthday party idea.

For your Valentine’s Amusement, here is the video; 4 minutes or so of me trying to get Mike to move faster so the video won’t be so long. Enjoy  .

After a long Valentine’s Day of hurking great piles of rotting lumber and remnants of ancient remodeling endeavors, and deploying still-perfectly-good life rafts, our evening goes like this:

Melissa: What’s for dinner, Baby?
Mike: Je ne sais quoi.
Melissa: You know you are irresistible to me when you speak French. Come here and get your Valentine’s gift you handsome devil.
Mike: Ow! Donnez-moi l’Advil, s’il vous plait. 15 thoughts on “You Speak Your Language, and We’ll Speak Ours”