Close on the heels of our passionate dumpster-heaving, life-raft-engorging Valentine’s Day, Melissa and I spent Sunday showing our little Galapagos some love.

V is for Valentines and Victron BMV 702

First on my project list was to install a battery monitor.  Galpagos has about 440 amp hours of AGM battery capacity but those batteries are really old. There was a current meter and shunt on the boat but with all of the other electrical projects I had disconnected those systems knowing that I would be upgrading soon. With Melissa’s insatiable lust for power, I need a system that can monitor the current draw from the soon to be installed refrigeration system, karaoke machine, disco ball and Lord knows what else.

I chose the Victron BMV 702 because of the glowing reviews in various cruising blogs. Chief among its advantages is a very simple plug and play connector between the meter and the shunt.  The 500 amp shunt also has an extra tap to allow you to measure either a second battery voltage (your start battery, for example) or measure the temperature of your battery.  If you don’t care about measuring a second battery, you can save yourself forty dollars and buy the BMV 700.

Since Galapagos had an existing shunt with two analog meters, I chose to use the existing holes.  As luck would have it the the Victron has a square face plate which did a pretty good job of hiding old scars.

The old analog meter along side the new Victron meter. What shall I do with the old meter?

Wiring in the new shunt was straight forward and allowed me to remove the old shunt and do a bit of cable cleanup.  It appeared to me that the old shunt was set up to measure all battery current, including the start battery.  The shunt itself looked like it had seen some high temperatures. Take a look

The old shunt, top. Looks kind of fried to me.

After hooking the negative battery cables to the new shunt I simply connected the meter to the shunt using the provided cable with RJ11 connectors (Phone Jacks). The kit comes with about thirty feet of cable so you have some flexibility in where you place your meter.

Once there is power to the unit, setup can be as simple or as complex as you wish. In its simplest form, you can set the battery capacity and the unit will assume that the battery is fully charged. At that point, a running total is maintained of how many amp hours are available with loads subtracting from the total and charging current adding to it.  There are a number of tweaks that are available to allow you to trim the unit to fit your specific needs. Right now, I am ecstatic just to know that I can monitor my batteries without having to pull my meter out and dig around in the battery box to measure the voltage as a rough guide to capacity. 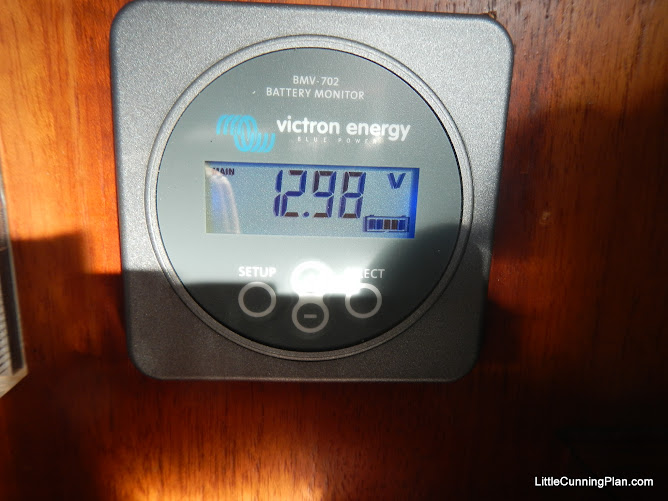 Power to the people!

While I was rerouting the cables I noticed the lug for the start battery positive terminal seemed a little loose. One of the things I love about Galapagos is that she has a really comfortable engine room.  A fellow can sit in there and ponder life’s imponderables, far from the madding crowd,  giving himself the time and space to consider things like those loose terminal lugs.  Maybe even have a short nap on the subject.  I made a note to go back and tighten them but that would not be necessary. The stud bolt had separated from the lead clamp and just came away in my hand.

See where stud bolt was seated on left side.

I could have looked at this clamp all day when the stud was sitting in the hole and never noticed that there was minimal contact between the battery and the cable.  A bouncy sea would have been all it took to create another trip to the engine room to start trouble shooting a mysterious, and probably intermittent engine problem. I love my engine room but all things in moderation.

So, with just one trip to the store for a new terminal lug, The Victron Battery Monitor is in.  I am looking forward to some quality on the hook time so that we can see how well our batteries are holding up.  I will save for another post my other electrical projects, but suffice to say, LED lghting and solar panels are involved. More juicy tidbits to come.