Melissa and I decided that a we were in need of break this weekend. Instead of schlepping down to Astoria and working non stop, we stayed home and only worked at half speed. Melissa put some time into her garden which is looking beautiful. I helped by taking a nap.

But even when we aren’t at the boat, we are thinking boaty thoughts. We are doing boaty things. Melissa has finished up a number of the cushions for the salon with a beautiful new fabric ( a future post on those is in the works). For my part, I have been making new docklines for the boat thanks to the good folks at Northwest Rigging.

Back in February, Melissa attended the Women’s Boating Seminar in Seattle. Melissa had a great time; especially when she won a $200 gift certificate from Andy Schwenk at Northwest Rigging. This was a stroke of luck for us because the docklines on S/V Nameless are so stiff that we can barely wrap them around a cleat. They are 3/4 inch three strand and are almost unworkable. We have washed them and they are a bit better but still pretty difficult to use.

I was thinking that the Brait lines made by Yale or Samson would be easier to handle and store. If you haven’t seen this line before, check out Yale Cordage’s offering. It has a very easy hand and offers good stretch and strength; similar to traditional three strand but much softer.

So a couple of weeks ago, I went up to Fisheries Supply and used the the Northwest Rigging account to buy most of 200 feet of 5/8 inch Yale Brait. 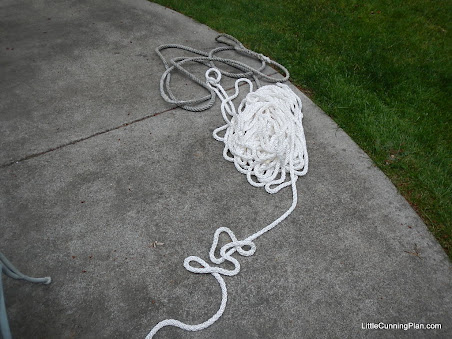 New Yale Brait with an old, stiff dockline in the background

Now 200 feet seems like a lot of line. The plan is to make two 25 foot lines for the bow and stern and two 50 foot lines to act as spring lines. That will leave 40 or so feet left over which I may make into a snubber for the anchor chain.

YouTube is great for so much more than cat videos. I was able to find a couple great splicing videos (see at the bottom of this post) from Samson and Yale on braiding the 8 strand line. It is very similar to splicing three strand; there are really just four parts that you have to keep straight. Check out the photos below:

Yales’s Brait has eight strands but they are in four pairs, making the splicing fairly easy.

After seven tucks, I cut one strand from each pair and finish tucking the remaining strand until I run out of room.

After finishing the loop and cutting the lines to length, I like to whip the ends. It gives the lines a salty look and is easier on the hand than a hard, melted glob of nylon. Although more work, I thought it would be nice to have two whippings on the 50 foot lines to make them easier to identify. Again, thanks to YouTube, I learned to make a whiplock after whipping the line and really like the way it looks. Hopefully it will make the whippings last longer too.

The double whipped 50 foot line on the left.

I’ll finish the docklines this weekend and save the remaining brait for the snubber. If you have never tried splicing your own lines, check out the videos below and give it a try. You’ll enjoy handling the lines all the more knowing you made them yourself.

This is Samson Rope’s video on Brait Splicing. The video a little tedious but thorough. You can adapt the lesson learned to other sizes and brands of cordage

This is an Annapolis Performance Sailing video on locking the whip stitch.

Also, take a look at Captain Mike’s quick rope whipping tutorial: http://captnmike.com/2011/10/26/mikes-quick-rope-whipping/ His site is full of useful articles on other topics, as well.

Finally one last thank you to Andy Schwenk at Northwest Rigging for supporting the women’s boating community. These new lines should help take some of the stress out of docking the boat.