Just over 43,000 pounds. That’s how much she weighs dry and unloaded. I just shook my head and thought, ‘Man. I was really hoping for about 10,000 pounds less. This is one heavy boat.’ Even though I knew that SailboatData.com, which says our boat weighs 30,000 pounds, was probably wrong, I didn’t think they would be THAT far off. She is a big girl. Mike went so far as to refer to her as ‘fat’ but I corrected him firmly and said she simply has big bones. Like many a diva, our boat is an Amazon. A blue Amazon. And today we took her for her first spin with us at the helm. 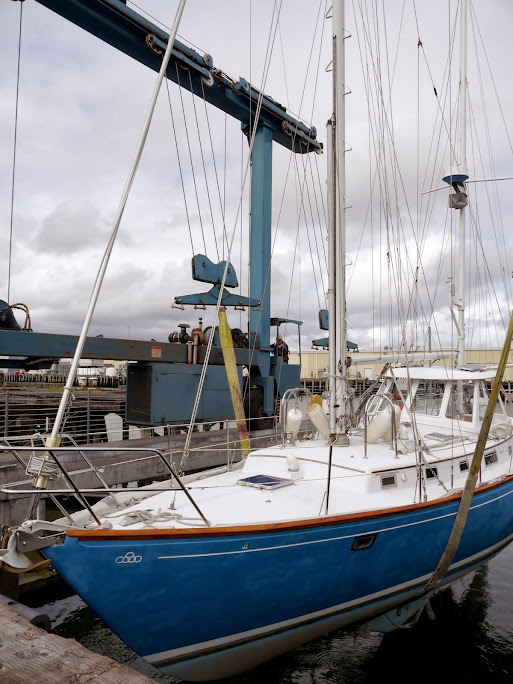 Going down, back to the water.

This day has kept us both awake at night for weeks now. As Mike began to see the light at the end of the long tunnel of work known as ‘repowering’ we both began imagining all the worst kinds of things that could happen when we finally found ourselves on the water in Andromeda. Would we need to deploy the anchor in order to keep the current from whisking us off to sea? (I blame Mike for this dark fantasy.) Would we careen into the fishing boat Sophia as we tried to dock this behemoth of a boat? (This was my own worst nightmare.) Would we crash into the dock ourselves and hurt Andromeda and possibly people standing by watching, mouths agape? Certainly we knew how to handle our Cal 34, Moonrise, but she was a completely different animal. I just wanted this day to be over.

With a 1:00 splash time, we were at the boat and ready. I had asked the gods for a dry spell and, indeed, the clouds had parted to reveal blue skies. I had said my prayers for protection and assistance as I always do and as the engine on the travel lift started up I heard the high pitched screech of eagles overhead. Two adult eagles were flying in tandem just over the boat, talking back and forth to each other, flying close together. Eagles are my special totem and they never cease to thrill me. When I see eagles after a prayer, I consider that my sign that things will be fine. Soon there were six eagles circling high over Andromeda. Excellent! I began to feel at peace and stop worrying. My stomach began to unclench.  While there was a brisk breeze, it was not an unusual breeze for Astoria. Things would be good.

As the travel lift approached, Steve, the lift operator, approached us and asked if we’d like to trade positions with another boat that was going back in the water. We wanted to be able to hang at the dock generally getting the feel of the boat and maybe do a few touch and go’s before returning to the marina. If we didn’t trade positions, we’d need to move out of the way more quickly to make room for the next boat. We chose to trade, and went to the Portway Tavern for lunch.

Our son, Andrew, is a sailor and, obviously, an iphone owner. He came with us to help should any of our dark fantasies come to fruition.

If you go to Astoria and like hamburgers, you cannot go wrong with the Portway Tavern, which hails itself as the longest continuously ‘serving’ tavern west of the Mississippi. Perhaps it is. I know they used to serve more than drinks because there used to be a brothel upstairs. Now they serve delicious food (their fish and chips is something to write home about, too) and you get a side serving of poltergeist activity to spice up your meal. That’s right. According to the cook, there are several resident ghosts who make their presence known by playing little tricks like putting the bread on the floor overnight, or sliding a chair across a room unannounced. When we were there one made its presence known by toppling a bottle of liquor off the bottom shelf behind the bar, onto the floor. Just one bottle, mind you, and it didn’t break. No harm done, but the look on the cook’s face was priceless. We then we got to hear the ghost stories. Makes for a very interesting lunch. There are also several dozen women’s bras hanging from the ceiling. So food, entertainment,  and atmosphere. You can hardly shake a stick at that.

During our time out for lunch the wind picked up smartly. Now we had tide and current going out, and wind coming in. Super. Steve said they were expecting 50 knot winds by nightfall. Probably should not have waited and had lunch. But with six eagles giving us the ‘go ahead’, who knew? 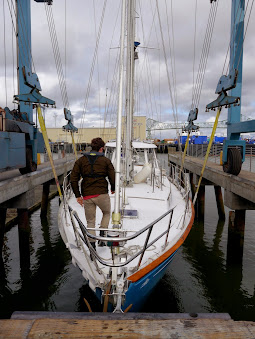 Andrew is first aboard.

The splash went well, the engine started strong and Mike and I were both, in a word, AMAZED at how well that engine pushed that boat through the water. She might be ‘big boned’ but she is nimble as can be and handles like a dream! Our gut feelings about this hull were right on. Regular readers will know this is our first time ever having this boat out on the water, much less being in control of her. We are just a pair of wild and crazy people who bought a boat without ever giving her a test spin because, well, she was the right boat for us. We were both just exclaiming over and over about how responsive she is and how great the three bladed prop is (I’ll never go back to a folding prop), how you can stop her so quickly, how graceful she is on the water… we kind of went on and on. We could feel her coming to life underneath our very feet. Here’s an embarrassing video or two, with plenty of talking over wind. Enjoy.”

Here’s the one Mike did. It’s equally wonderful. I know you want to see them both.

I had taken up my usual position at the helm as I used to do on Moonrise when we docked. I was always the ‘driver’, so I just assumed I would be the ‘driver’ this time, too. But then I thought maybe Mike would want to dock her for the first time, as he has worked his butt off on that engine and really deserved it. Also that way if he crashed into the dock it wouldn’t be my fault. Who am I kidding?  Although the current threatened to push us into the marina faster than we felt comfortable, with the powerful engine and reverse thrust, Mike handled her like a pro and came up alongside the dock like he’d been docking her all his life. Andrew stepped off and tied off the middle cleat and she was secured. The rest was easy. And it was done! She was back in the water, we’d had our first small adventure, and now we cannot wait to take her out and play in a quiet location so we can learn the anchoring system and practice handling her. A day that darkened the quiet recesses of our minds for weeks turned out to be just grand after all.

Finally a chance at the helm.

And before I go, I want to give a shout out of thanks to my friend Behan Fravel Gifford, co-captain of S/V Totem and long time blogger. I’d also like to thank my friend Cidnie Carroll, author of the blog Our Life with Ceol Mor. They are “co-captains” (admins) of a wonderful group of women on Facebook called Women Who Sail. Here’s why I’m thanking them:

Our daughter, Claire, is traveling in Europe and the U.K. and a couple of days ago while in Amsterdam she was robbed while she slept in a hostel. Her iphone, passport, credit cards and money were under her pillow. The thief approached her in the wee hours of the morning, slid his slimy hand under her sleeping head, and took everything. He was probably a very experienced fellow. The police seem disinclined to follow up too much.

Although our daughter was not physically harmed, thanks be to God, it is more than a little bit unsettling to be a young woman in a foreign country without any form of identification, and with no one you know. She knew how to take care of business since she is an experienced traveler and an adult, and she had copies of all her documents. But I really wanted someone to take her under their wing; someone from her own country, someone with a small connection to home, even if a thin one. At 4:30 in the morning, after hanging up the phone with Claire, my first thought was to post this issue to the WWS Facebook group. I wrote a rather rambly post asking if there was anyone in the Amsterdam area who would be willing to give Claire a hand. Cidnie saw the post and immediately made it a ‘sticky’, ensuring that the post stayed at the top of the page so everyone would see it. She also posted it to her Facebook page.

I finally fell back to sleep and while I was sleeping the women in other time zones were putting the word out. There were so many responses of support and help that it would be hard to name everyone individually, but I’d like to thank each person who posted and let them know that their support meant a lot to me.

One of the many offers of help for Claire came from Behan and her cousin, Kate, who is a graduate student in Amsterdam. We three connected via Facebook messenger, and I forwarded Kate’s contact information to Claire. I understand they were to meet and have coffee today and I am eternally grateful for that.

It is a new experience for me to be a member of a group that simply jumps into action when one of its members needs help. This is a true community of women, and Behan and Cidnie are both admins, a sometimes thankless and always difficult job.  Thank you so much, Behan and Cidnie, for your generous spirits and for being leaders in the cruising community. Thank you also for understanding that being a mother does not stop when your children turn 18, or even 28.  Your own children are young, and yet you ‘get’ it.  And thank you, Women Who Sail, for being an awesome group of women. I will fly my burgee with pride.

26 thoughts on “Splashdown 2014, and Some Other Important Commentary”