While Melissa was evacuating from her old office and attending the sailing conference, I spent another weekend in Astoria inching ever closer to that happy day when Andromeda is back in the water. We make progress, but slowly.

Since the weather was pretty mild on Saturday, I got to work right away sealing the cockpit sole and screwing it back down. The sole has been sitting loose since John, the previous owner removed the old engine sometime in September. That means that water has had an easy time flowing into the engine room and we had to keep the steering pedestal and other steering hardware down below. Now that the new engine is in, I really wanted to start buttoning up the cockpit. We have enough trouble keeping the boat dry without having the engine room practically open to a rainy Astoria Winter.

My Bear Trap.  This allowed me to apply the butyl tape and then lower the floor down with a minimum of lateral movement.

Melissa bought some grey Butyl Tape from This Guy after reading about its superior quality from Tate and Dani of Sundowner Sails Again. This was my first experience using this tape and I am so far very impressed with its ease of use and tenacity. I did have a bit of a learning curve when it came to applying it though. 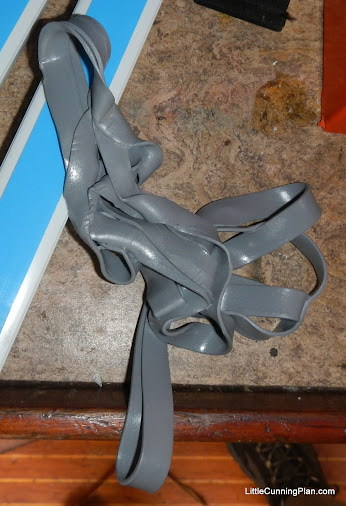 Lesson one with butyl tape. Do Not Remove the paper backing until the tape is applied to at least one surface. This stuff is tacky!

I applied slightly overlapping runs of the tape to the cleaned and freshly wiped lip of the the sole.

For reference, check out our earlier post on getting the cockpit sole cleaned.

Once I had run the tape around the perimeter and gently lowered the sole back down, it was time to screw down the sole and seal the 32 holes that had been originally used. That’s a lot of 1/4 inch screw holes. Assuming 100 Kips of tension as the low end of the range for a quarter inch 304 or 316 stainless screw, clearly we are more concerned with the amount of attachment area between the screw and the fiberglass sole. I opted to screw down on both sides of each corner and once on each side, which comes to twelve attachment points for the sole. The remaining twenty unused holes were filled with epoxy.

Corners and sides are screwed and filled with Life Caulk. The unused holes are filled with epoxy.

I hope I don’t regret using the Life Caulk for the screws. After using the butyl tape, I think it may make a superior seal. It is certainly easier to work with.

We will refinish the sole at a later time. This may be an opportunity to use the Kiwi Grip paint. We will need something that provides a good grip but that won’t trap a lot of dirt. Suggestions anyone?

With the sole finally secured, I was really excited to put the steering pedestal and wheel back in the cockpit. I have knocked the pedestal over three times and am amazed that I haven’t broken the thing as we work around it down below. I had to repaint some of the brackets holding the steering pump and hooking up the rudder hydraulics is still a little ways off, but man it feels good to have an actual wheel back in the cockpit.

Since this post is running a bit long, I’ll save the engine alignment for Friday. But I do want to leave you with a final photo of one of Melissa’s projects. We brought home hundreds of pounds of hardware which Melissa meticulously went through and organized. We still have some weird stuff that I need to look at, but the screws, bulbs, O-rings, and a thousand other bits and pieces are now on Andromeda and labeled! Anyone who has ever just thrown up their hands and gone to the Chandlery for yet another bit of stainless steel will appreciate how great it is to have the ability to lay your hand on just the right sized screw for a particular application.

The metal bar with a dog leg is for the engine control cable. Finding the correct screw for the job was easy.

We have several containers like this which are divided by type, (Machine, Wood, Brass etc) The organization is still a work in progress but so far, I have saved hours looking for parts or going to the store to buy something we already have but can’t find. Thanks Baby!

15 thoughts on “Creeping Towards Victory”