The dirty little secret among sailors is that while all we talk about is sailing, what we all long for is an engine that can reliably get us into and out of marinas, anchorages and dicey situations. An engine helps us work our way around the crunchy bits of the watery world we want to explore.

Today we have that engine. 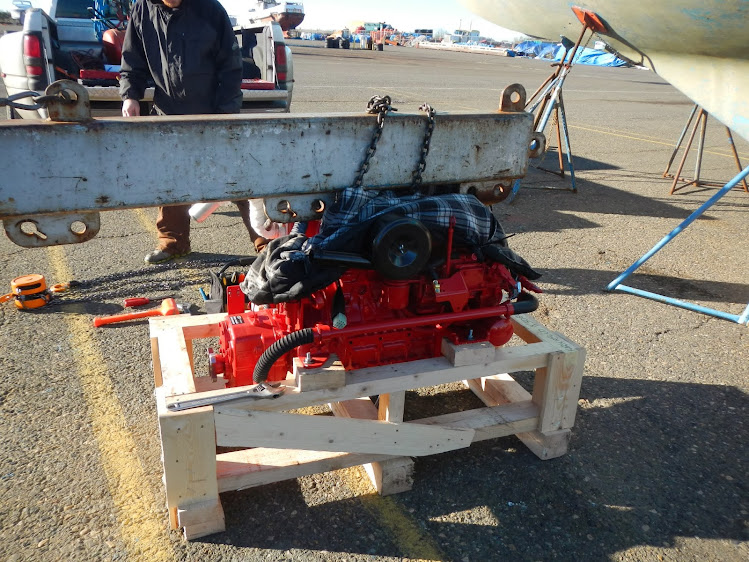 This is where having someone experienced in the art of lifting heavy objects comes in handy. Shawn had many tricks to make fitting the 49 inch tall engine and boom fit into the 39 inch tall opening under the dodger. He also sacrificed a shirt to keep the shiny red paint looking good.

The morning broke in Astoria clear, cold and with a wind blowing fierce out of the east. Shawn the diesel mechanic showed up with our engine for the second time in seven days but we were both determined to drop this puppy into Andromeda before the day was out. 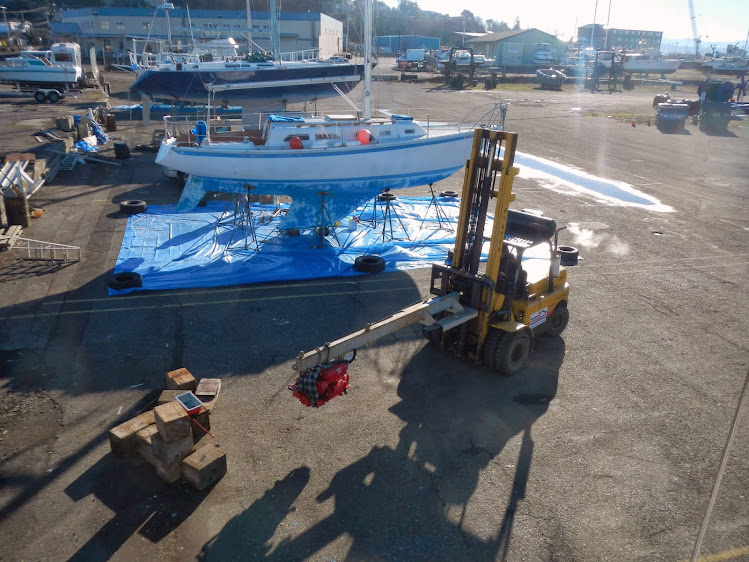 The Port of Astoria has turned out to be a terrific place for the repower project. On a Sunday, the forklift had the key in the ignition and the boom was well built and ready for use.

The effort was not without its challenges. Shawn did the math and quickly concluded that the engine and boom height combined would not go between the top of the dodger and the cockpit coaming. His solution? Take off the oil pan and sump pickup. That gave us about eight additional inches of clearance, which was about a quarter of an inch more than we needed. 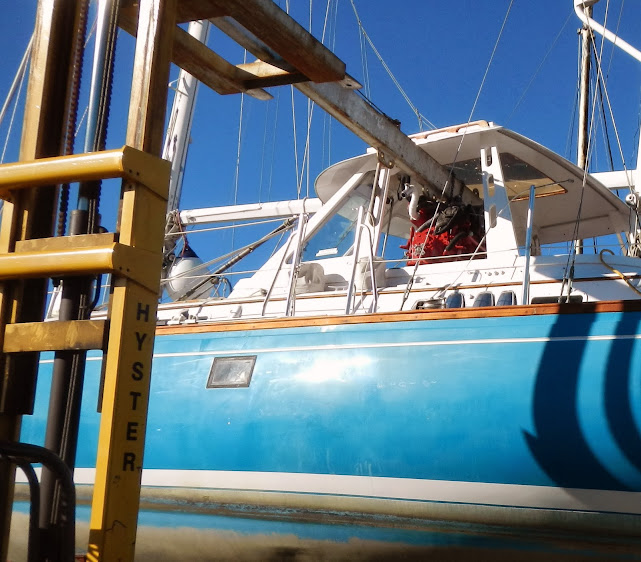 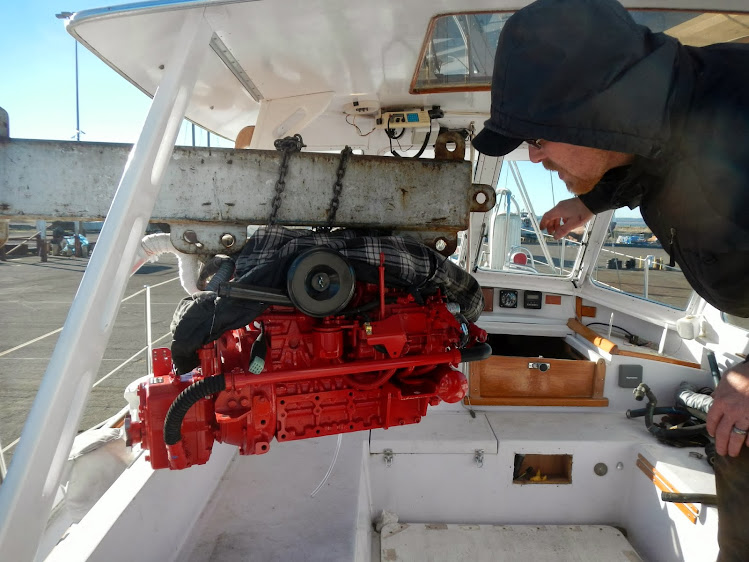 Once the engine was  under the dodger, we removed the cockpit sole and placed some blocking to allow us to set down the engine and set up our chain hoist. 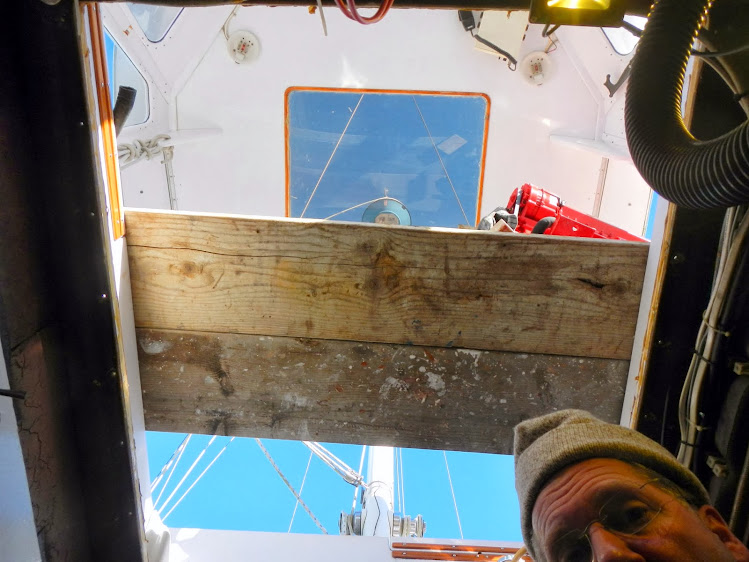 An engine room with a view. The two by twelves above me were used to set the engine down while we got the chain hoist in place.

I love field engineering solutions to problems like this and it was great to work with a guy like Shawn who won’t be deterred by something trivial like no brakes on the forklift. 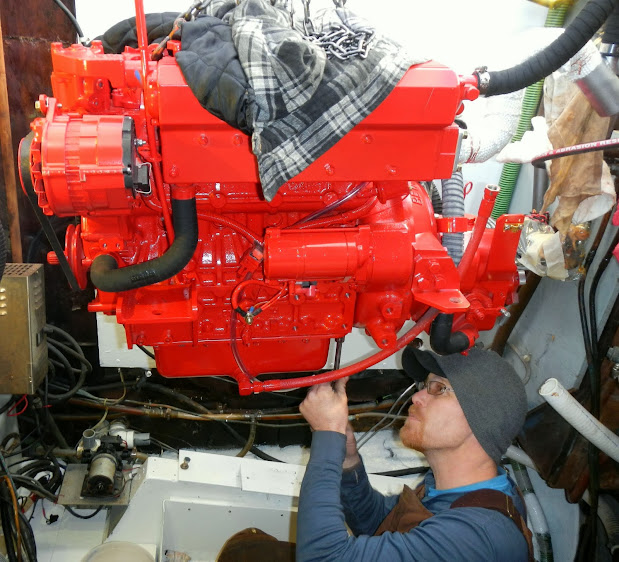 Once the engine was in the hole, Shawn re-installed the oil pan. That is a brand new, one ton chain hoist that Shawn is depending on.

The new rails required some modification. Shawn had to drill new holes to match the existing threaded inserts installed into the boat’s engine beds. Once that task was completed we were able to bolt down the new rails and lower the engine onto the rails. 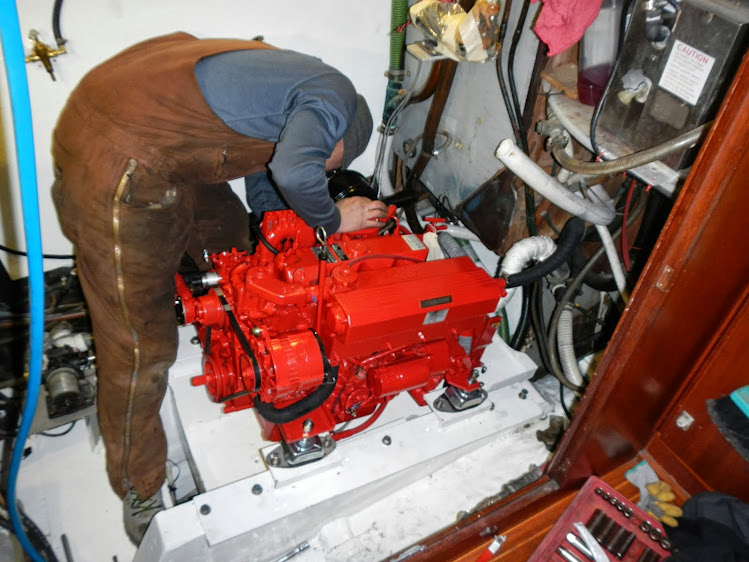 Shawn tweaks the feet on the back of the engine. Until we get the new cutless bearing and prop shaft, this is all roughed in.

I think the engine is a little further back than either of us thought it would be, but the transmission dipstick and filler are pretty easy to access. The electrical control cable is just long enough to reach and connect to the engine without an extension and both the raw water and fuel lines are just a short jump from the starboard wall where the raw water strainer and fuel filters are located. There is also plenty of room in front of the engine to work tension belts or replace the raw water impeller. All in all we have great access to every part of the engine. 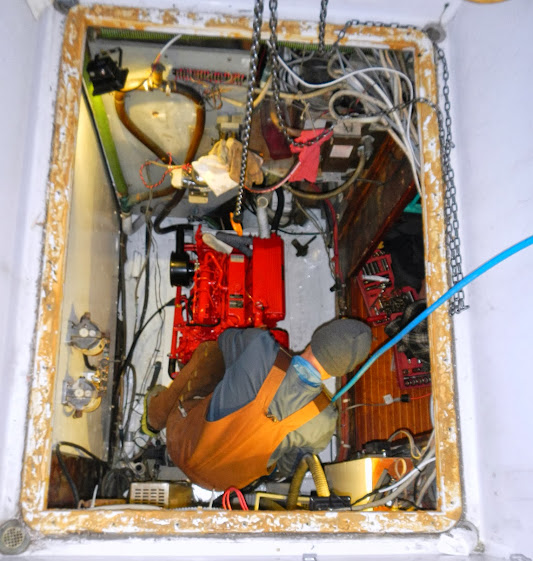 Shawn putting the finishing touches on the engine rail bolts. The old threads were pretty grungy and needed a little love from the impact driver.

We had Shawn’s tools packed and in his truck just as the sun was setting. He was happy to not be lugging a 600 pound engine up and down the Columbia river for another week. It had been a long day but finally, we have a new engine in Andromeda. We will disregard for a moment that it has no fuel, water, oil or battery. Those will come later.

It may seem trite to some that a big hunk of steel could be so important to the success of our cunning plan, but it is true. We are products of a culture that is in love with the power to just get up and go. Whether it is a 67 Mustang or 60 horse Beta, being able move under our own terms, on our own schedule, is important to us. Knowing that our new beta engine will be there for us around the crunchy bits will give us the false sense of security we need to really get in trouble.

16 thoughts on “The Beta has Landed”