Somewhere on this blog I’m sure I have already confessed to being easily bored. It’s true, I like for life to be just a little interesting with fun things to do and new things to learn. Maybe that’s why I like spending weeks on the boat so much; exploring new places and having new adventures just suits me.

Just now we’re at a point in our lives where things are becoming bland. We are truly living life in the ‘beige’ just now.  One kid is grown, one kid is in college, we’ve both been in the same jobs since the Pleistocene.  We’ve lived in this house for almost 13 years and there aren’t any big projects left, only maintenance projects and everyone knows how BORING maintenance is. How many times can I paint molding before I go insane and start throwing things? How many weeds can I pull in a yard this big before I completely lose my mind, especially in the winter when it’s dark and wet constantly. (Are we SURE that Washington isn’t moving further north, say toward Alaska or, maybe the arctic region, or the cold void of space? Because it sure seems that way.) Our Fran, who was the most beautiful dog to ever live, and who we still miss every day.

Furthermore, in the last year we’ve reduced the size of our family by 3 pets. We’ve lost one cat, adopted out another because she was lonely, and lost our beloved Australian Shepherd, Franny. We are down to one dog, Skippy the Aussie. I know we’re preparing to go cruising by downsizing, but this is ridiculous. I realized that during this phase of the preparations for a life yet to be lived, life is beginning to feel just a little empty. Since we don’t yet have the cruising boat, we needed a project, something to capture our interest and attention; something to entertain us and rip up all my carefully planned gardens. Something to spend money on.  And my sister had just the solution. Chickens. 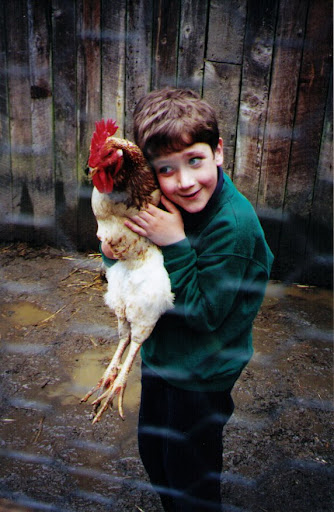 Andrew loving on a chicken, age 7

Our son, Andrew has wanted chickens for years and I’ve always said ‘no’ because I didn’t want more animals to care for. When he was 12 I gave in partially by getting him a taxidermy chicken, complete with real feathers, for Christmas. It was more expensive than a real chicken. It had a straw nest. He loved it and it lived in his room until very recently, when I discovered mites eating the feathers and it had to go. Fortunately, Clucky lives on forever and ever at this Facebook page created by some of his friends back in high school. They came. They stole the chicken. They took it places and photographed it.

Clucky, being not amused.

Mike also wanted chickens but saw the wisdom in not bringing in more animals than we could handle. And at this point we certainly don’t want to adopt animals that are going to interfere with our cruising plans. So when my sister, Amy, and her husband found out they were moving down to Oregon for 18 months, it just made good sense that we would become foster parents to their 6 little hens while they were away. Perfect! We get to play with chickens, buy them little chicken clothes, keep their nails filed and painted,  and collect eggs. By the time they come back we should be that much further along with our cunning plan and the chickens can go home.

Let the entertainment begin! My idea was to turn the chickens loose in the garden during the winter while most of my perennials are dormant. Weeds never stop sprouting and growing up here so there is a nice crop just awaiting attention from the chickens’ sharp talons. It would be an excellent plan except for one thing. How, exactly, does one get chickens to go where one wants them? We have a yard that is 3/4 acre. I’ll pause in the writing while you try to imagine it. Go to the garden page of this site to give yourself an appropriate visual sense of what we’re dealing with here.

We have tried herding them with sticks and that resulted in a nice game of ‘here we go round the rhododendron bush’ as they deftly ducked under the branches and scattered in all directions. Anyone who says chickens are not smart has never tried to catch one. Although I originally thought I would be the one to enjoy the chickens most, it’s Mike who has taken to them like a natural farmer. It’s in his blood since he used to raise calves when he was a boy. I, on the other hand, am more distant from my farming ancestors. The chickens actually like him better, too. They eat from his hand. They run from me, looking askance from a far corner of the coop as I offer them tasty morsels. They are not fooled. They know I want them to work for a living.

Mike has spent most of his spare time lately working on chicken projects: a timed light for their little coop, creating areas for storing their little chicken stuff, making portable fencing so we can keep them safely contained in the areas I want worked, making sure they have fresh straw, checking for eggs several times a day and reading about them in a myriad of books he found at the library. His next project is to build a portable coop, using an old garden wagon I was getting ready to give away on Craigslist. See how we shouldn’t be getting rid of stuff? He loves him some little chickens. It’s so cute. Today I received a text message from him during the work day: “Any eggs? Do you have a photo of the coop you can send me?” . Yes. My husband is talking chickens at work. This photo was taken in the middle of the day. There still wasn’t enough light to get a good, sharp image. People who think they should move to Washington, please take careful note.

So we will be suburban farmers and collect yummy fresh eggs and watch cute birds tear the hell out of my garden for 18 months. Whatever survives wills stay. And they’ll have to stay in the coop come spring because I’m not going to have holes in my hostas weeds or no weeds. I have SOME standards. Andrew will have chickens to cuddle when he’s home, and Skippy will go ballistic knowing there are other animals in his yard and he’s not allowed to get to them. It’s not that I like chaos. Really! It’s just that life is suddenly a little more interesting just now.